It was a gloomy day in southern Ontario. Although the canoe I paddled in was quiet, the landscape — filled with croaks and chirping — was anything but. Three metres away, a small creature emerged from the glass-like water to stretch its tiny head from beneath its strong shell. Swimming through shadowy water, the darkness of the lake only made its yellow neck stand out more. As we carefully paddled closer to our new friend, he greeted us with a smile. It was a Blanding’s turtle.

Turtles are often a familiar sight on summer canoe trips or on trails with nearby water across Canada. Learn about these slow but steady creatures, below.

There are 12 species of turtles in Canada. Blanding’s turtles, such as the one I encountered, are found in southern parts of Ontario, Quebec and central-southwest Nova Scotia. Reaching up to 25 centimetres in length, this medium-sized turtle can live more than 75 years in the wild. Blanding’s turtles are easily characterized by their bright yellow throats and plastron (bottom shell) and an upward-curving mouth, making it look like the species is always smiling. 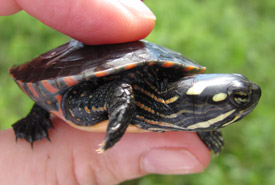 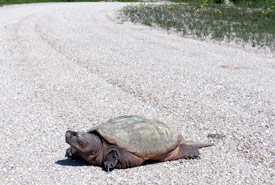 Reaching only four to six inches long, painted turtles are tiny compared to their snappy relatives. Coming in at a whopping 18 inches long, the snapping turtle is Canada’s largest freshwater turtle species. Due to habitat degradation and human interference, snapping turtle populations are assessed as species of special concern by the Committee on the Status of Endangered Wildlife in Canada.

In Canada, the turtle has a cultural significance as strong as the shell on its back. In some Indigenous stories, this powerful carapace is the foundation upon which the land was built.

In the Earth Diver story, the Great Spirit dives, or orders animals to dive, into the water to bring back mud or clay from which he fashions the Earth. In other versions, the Earth is formed on the back of a turtle. Stemming from this tale is the popular name for North America, "Turtle Island." 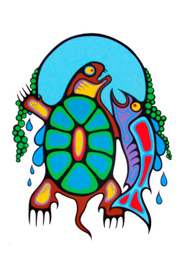 Nature has always and continues to have a strong influence in Indigenous art, and the turtle is no stranger to the canvas.

Mark Anthony Jacobson, a Woodland artist from Sioux Lookout, Ontario, but now lives and works in British Columbia, uses his art to connect viewers with Canadian wildlife. In his piece “The Four Elements - Water,” a turtle adorned with the same yellow throat that I saw that dreary Sunday morning depicts the species’ connection to the land.

Anishinaabe artist Norval Morrisseau depicts the Earth Diver myth in his painting "Turtle Island," and has illustrated the species in several of his works, including "Androgyny," which once hung in Rideau Hall.

How NCC is protecting habitat for turtles

Turtles continue to affect the way we view the land. In Quebec, the Nature Conservancy of Canada (NCC) is taking measures to ensure the habitat of map turtles is protected on the Hochelaga Archipelago. Staff are implementing a conservation plan that provides concrete recommendations to limit population losses of species, such as map turtle. NCC, with help from our partners, launched an interactive platform for reporting turtle sightings throughout Quebec: carapace.ca. This easy-to-use tool is intended to collect information from the public on road fatality hot spots for turtles, including identifying zones where they can potentially be hit by cars.

In the Ottawa Valley, NCC encourages the public to report any sightings of Blanding’s turtles and help them safely cross busy roads.