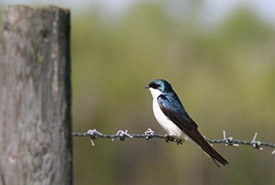 I don’t know about you, but by this time of the year I am ready for winter to be over. I think birds feel the same way.

As soon as the sun comes out of hiding and the temperature inches above freezing after a dreary Ontario winter, the resident birds begin to sing. I don’t even mind getting woken up early by the house finch outside my window, as I am also rejoicing in the coming of spring. And before we know it, migratory birds will be returning as well. You know it’s spring when you hear the familiar call of a red-winged blackbird that has returned from its winter foray down south. 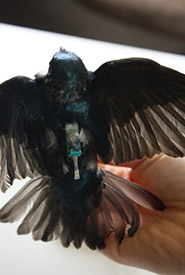 A tree swallow equipped with a light-level geolocator (Photo by Dayna LeClair).

Some birds will be returning wearing what looks like a tiny backpack. In fact, they are carrying a tracking device that allows researchers to understand where they have been all winter. There are a few different types of tracking devices out there; some use GPS technology, some transmit radio signals and others use light levels (called geolocators) to estimate a bird’s position. Researchers usually equip birds with these devices during the breeding season and rely on the devices to track individual movements for a full year until the bird returns the following spring.

We gain a wealth of knowledge by understanding the migratory patterns of different species. While we typically have a pretty good understanding of the breeding and wintering ranges of most species, we know very little about how individuals from different populations interact in other seasons. In other words, do individuals from different breeding populations mix at their winter destination or do they remain segregated? 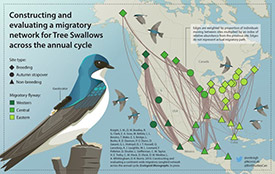 Let’s take a closer look at migratory patterns using tree swallow migration. For my master’s thesis, I analyzed data from 133 light-level geolocators attached to tree swallows at 12 populations across their breeding range in North America. With these data, my collaborators and I were able to map the most comprehensive songbird migration network to date.

We found that tree swallows migrated using three distinct flyways. Birds in British Columbia migrated west of the Rocky Mountains to western Mexico. Tree swallows in the Prairies (and Alaska) migrated along the Mississippi River to winter around the western Gulf of Mexico. The remaining birds in the east migrated down the Atlantic coast to Florida and the Caribbean. There was very little mixing among these three flyways.

What does this tell us about conservation of tree swallows? Previous studies have shown that the eastern populations are experiencing declines, and researchers, such as my collaborators, are working to understand what is driving them.

Though declining insect populations and habitat loss have been identified as potential threats, there is no clear cause of decline on the breeding grounds. However, we now know that these populations share the same eastern flyway, and most individuals go to Florida and the Caribbean. Perhaps this is where the threat to tree swallows is occurring. We can make a reasonable guess that the threat isn’t in Mexico. Future research should, therefore, explore threats to tree swallows in Florida and the Caribbean.

So, as the migratory birds return to Canada this spring, keep an ear out for the liquid song and chatter of tree swallows. No matter where you are across the country, you can think about where their migration has taken them this past year. 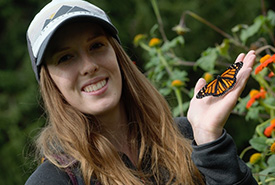