What does the fox say? Well, that wasn't really the focus of this study 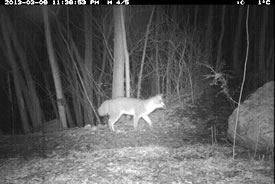 Gray fox on Pelee Island, ON (Photo by NCC)

I find it quite bizarre how Canadians were overwhelmingly curious about what the fox says this year. As the video went viral over the last few months, I found myself joking with colleagues that any biologist worth their weight has been aware of red and gray fox vocalizations for years…

When we launched our field study on Pelee Island last year, this was one question we did not set out to answer.

It is still amazing to me how even relatively large animals can be completely missed, even by field biologists who are lucky enough to spend a lot of time out and about documenting wildlife! The gray fox on Pelee Island is no exception: despite spending many, many long field days tromping through all sorts of habitats, my colleague Jill and I had never seen (or heard!) one, and we were sorely tempted to believe they didn’t exist.

Although we had heard of gray fox sightings from islanders and visitors, we had no idea how many there were nor what habitat they need. A collaboration between the Nature Conservancy of Canada (NCC) and Trent University’s Jeff Bowman provided the opportunity for us to learn more about the elusive canid. These foxes are more cat-like than dog-like; they have relatively short legs and are able to climb trees! In Canada, this endearing creature occurs in Ontario and Manitoba. In Ontario, it is listed as threatened and is only known to breed on Pelee Island. This project aimed to estimate the species' population size and habitat use on NCC and other conservation lands on Pelee Island.

To capture the animals' attention, we installed little pieces of carpet infused with catnip oil on selected trees at locations where we thought the fox would be found; previous work elsewhere had shown this to be effective in attracting gray foxes. We then installed motion-sensitive cameras facing the bait station. The cameras were programmed to be triggered by the movement of anything warmer than the general surroundings — so something warm and fuzzy like a gray fox sniffing at the bait would trigger the camera to take photos, but a branch blowing in the wind would not.

We had 10 cameras in total, which we rotated through 30 locations on conservation lands. We hired a local islander to move the cameras during the winter months when the ferry was not running and we weren’t able to get to the island.

(Story continues below the slideshow.)

Although Pelee is a small island, our cameras showed that it’s a busy one! Over a year of sampling, the cameras took a total of 32,639 photos of animals. A summer student at Trent University had the daunting task of going through all of the photos and identifying the species photographed, with more than 24 species and of course a few unknowns. The commonest animals detected were raccoons, wild turkeys, eastern cottontail, coyotes and introduced fox squirrels.

Perhaps most excitingly, we did detect gray foxes using several of NCC’s properties quite frequently, especially through the winter months!

Unfortunately, none of the animals showed much interest in our bait. This meant that we did not obtain any hair samples for DNA analysis. We had hoped to be able to examine the population from a genetic standpoint, to learn more about the sex ratio, relatedness to each other and to other populations. We still hope to make good use of the data we do have, both on gray foxes and other species, to better understand how wildlife uses conservation lands on the island.

Our cameras also lacked microphones, so we were unable to shed any light on what exactly these foxes say, nor whether Pelee’s foxes have a Canadian accent. However, Jill and I are now convinced that these incredibly cute creatures do in fact exist, but still hope to catch a glimpse of one in the flesh to be sure! 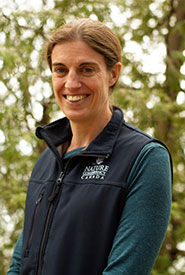