What the heck is a neotenic salamander? 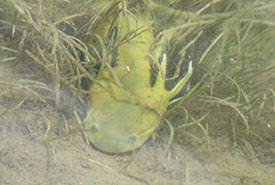 My dad told me about it during a phone call. A neighbour had discovered some weird, not-seen-here-before creatures in his dugout. Bright yellow ones, dark ones, some with frills around their necks like miniature dinosaurs; these creatures were numerous and active in the clear water. They certainly changed the neighbour's mind about swimming in there. What were they? How did they get to this area in east-central Saskatchewan? Speculation was that they were salamanders or mudpuppies, but even the old timers like my dad, a farmer and hunter in this area his whole life, were stumped by the prehistoric-looking yellow creatures.

So on a recent visit to my parents' house, I took my camera to investigate this exotic beast. I carefully walked the steep slopes around the perimeter of the dugout, but no luck. Maybe they were pulling my leg. However, all was not lost as I was treated to an aerial ballet of bank swallows as they skimmed the surface of the water, scooping up insects for breakfast. 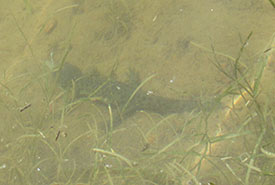 A dark salamander submerged under some sticks (Photo by Sherry Nigro)

Undeterred, I ventured out in the afternoon, and this time I had success! I found a dark salamander submerged under some sticks, a long insect sticking out of its mouth. But more exciting was the pair of large, lemon-yellow "things" scooting under some weeds. They had four legs and were about eight inches long, an inch or two in diameter with a long, finned tail. They did indeed have neck frills. I was amazed and delighted to get a couple of photos.

So as soon as I got to the airport (no cell service out in this rural area) to return to my home in Ottawa, I posted the pics on my iNaturalist account and discovered these “things” were western tiger salamanders. However, the pictures on iNaturalist didn't show the appendages on the neck. Were the ones I saw mutants? A new variant? The mystery was solved about half an hour later when a helpful herpetologist confirmed the identification and commented on how awesome the neotenic ones are. What the heck is a neotenic salamander? 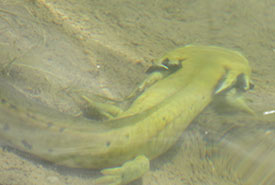 With a bit of online research, I learned that neoteny is essentially the failure to grow up. It is not uncommon in tiger salamanders, when some will retain the features of the larval or "eft" stage — external gills, dorsal fin, wide head even after sexual maturity. It tends to occur in aquatic habitats that are closed so that the salamander is forced to live there, such as in a dugout or reservoir.

According to iNaturalist, the western tiger salamander ranges from southwest British Columbia to as far north as Edmonton, and as far south as the Red River in Manitoba. Like other amphibians, it lays eggs in water, is aquatic in the larval stage and becomes terrestrial (land-based) as an adult. It tends to be nocturnal and will eat whatever it can catch. It is a species of mole salamander and is one of the largest salamanders in North America.

A report done by the Committee on the Status of Endangered Wildlife in Canada in 2012 assessed the current status of the prairie/boreal population of the western tiger salamander as special concern. 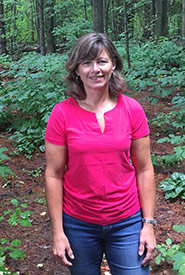 Sherry Nigro has taken her upbringing in rural Saskatchewan, together with a career in public health, to the "natural" conclusion that time in nature is good for us, physically, emotionally and socially.