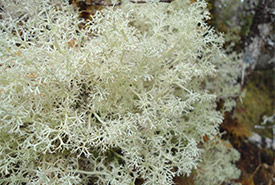 The clean air, cool foggy climate and contiguous old-growth forests of the Island of Newfoundland are an ideal formula for some very rare lichens. These species include boreal felt lichen, vole ears lichen and blue felt lichen.

These lichens rely on pollutant-free and undisturbed areas to flourish. This means the protection of their habitat from development is a key part of sustaining their populations.

But you, like many people, may be wondering; why exactly should I care about lichen? 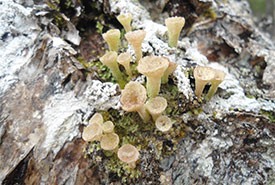 What the heck is lichen anyway?

Lichens come in diverse shapes, sizes, colours and textures. Some appear rigid and bush-like; others, delicate and leaf-like. Several take forms better described as having the appearance of mini hockey pucks, tangled string or tiny trumpets!

Although some lichens appear superficially similar to moss, lichen is not remotely related to moss or any other plant. Lichens do not have roots to absorb water and nutrients; rather, they produce their own food using sunlight, air, water and minerals in the environment.

Lichens are one of nature’s most interesting marriages; a tight-knit association between two organisms: a fungus and an alga. This association is so tight that neither one can grow or reproduce without the other – together they are quite literally better than the sum of their parts. The fungal partner in the relationship benefits by gaining access to food made by the alga through photosynthesis. The alga profits from having a protected place to live within the fungal filaments and increased access to moisture and minerals.

Remember, lichen is a fungi and an alga…and they are likin’ one another. 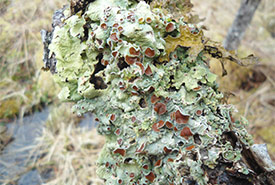 What’s in a name?

If the idea of tiny trumpets doesn’t make lichen sound like it’s part of some bizarre, tiny, magical world, then consider some of these common lichen names:

This fungus-alga romance allows lichens to exist in some of the harshest environments on the planet, from dry deserts to arctic tundra. Lichens can colonize nearly every imaginable type of surface, including rock, bark, soil and even glass. Some lichens can even survive, unprotected, in space!

Why was the lichen invited to the party? Because he’s mostly a fungi. 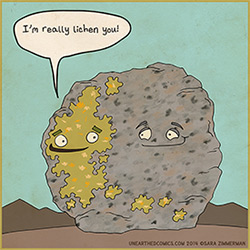 Other important qualities of lichens

Besides their Dr. Seuss-esque appeal, lichens have many other important qualities.

Bioindicators – Despite the ability of many lichens to grow in difficult environments, most species are vulnerable to poor air quality, making them useful as environmental health indicators. Lichens, especially ”leafy” or ”shrubby” lichens, are more abundant in areas with clean air. Old trees or undisturbed gravestones are good places to look for lichen diversity if you are curious about the air quality in your region.

A valuable food source – Many animals, perhaps most notably caribou, depend on lichen as a food source during winter seasons and in environments where vegetation is scarce or absent.

Colonizers – Lichens are one of the first organisms to inhabit bare surfaces. Over time, lichens can disintegrate surfaces such as rock via mechanical actions and chemical secretions, creating bits of soil. Damaged and decayed lichens can additionally supply humus (the organic top layer of soil). Eventually enough soil can form to support mosses and other plant life.

Survival of the slow in a fast-paced world

In a fast-paced world, survival of the slow can be a challenge. Air pollution, acid precipitation and habitat loss due to human activities can very quickly destroy lichen populations. Once disturbed, lichens require a very long time to recolonize.

Extremely slow growth also makes it tough to study lichens. But without a thorough understanding of lichens, it can be difficult to successfully protect and restore them. The most straightforward and effective way to protect lichens is to identify and conserve the regions and ecosystems where rare lichen species thrive.

The unique geographic situation of the Island of Newfoundland means that it is isolated from mainland sources of pollution and has a cool, moist and foggy climate. The island’s intact, old-growth, boreal forests, often nestled in valleys, offer rare lichens ideal "fog forest" habitat. 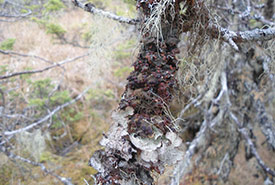 The protection of these forests is a key step in sustaining these rare lichens. Newfoundland is home to 95 percent of the world’s population of boreal felt lichen, making the health of the Newfoundland population critical to the global survival of the species.

There is a lot to like about lichens and many good reasons to care about their conservation.

Lichens are a mind-boggling relationship between two completely unrelated organisms which, together, are incredibly important as food sources and as environmental health indicators. They also lend themselves well to puns.

In short, the question should be, what is NOT to like about lichens?

Check out these great linked websites for further enlichenment. To find out more about the Nature Conservancy of Canada’s work to protect habitat for rare lichens in Newfoundland and Labrador, please visit: www.natureconservancy.ca/nl.