When the walls came down 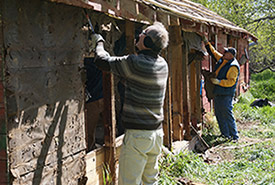 As I journeyed south on Highway 2 to participate in the Bear(s) in Mind Conservation Volunteers (CV) event, I pondered the cloudy skies hanging low over the mountains.  Was this to be a cold and soggy day or would our historical luck for nice weather hold true for another CV event? As I headed westward on Highway 3, the snowy peaks of the Rockies appeared on the horizon. Ah, what a stunning view! Lastly, meandering southward on Highway 6 I just had to make a pit stop, for along the roadside lazing on the hill, basking in the morning sun, was a small group of deer. My hope for good weather soared.

It was easy to spot where the event was being held for a number of vehicles lined the long driveway. I parked the car and attempted to climb out, only to discover that the wind’s strength paralleled my own. Having successfully forced my way out of the car, my first impression was of the television series"The Flying Nun." As I chased my Nature Conservancy of Canada (NCC) cap across the terrain I had the impulse to spread the sides of my jacket wide-open and like a kite soar above the grasslands. You might say I was a flying nut.

Arriving at the farmstead, nestled deep into the recesses of the hills, I felt excitement stir as familiar faces appeared amongst the group. With the winds pommeling us, I could not help but shout out, “Happy feet, everyone. A little more sun, a little less wind, please!” Thankfully, that is exactly what we received that day. The hills' protection from the gusts and the sweat of one’s efforts resulted in a jacket or two being tossed aside.

Our task for the day was to dismantle a former grain bin on the property. Grain bins attract curious grizzly bears, who will stop at nothing to get at the tasty treats inside.

As I am a carpenter’s daughter, my decision as to whether I wanted to clear out the building’s contents, haul away the debris or to use a wrecking bar and hammer was an easy one. As the claws of the wrecking bar dug behind the boards, it reminded me of a bear clawing away at a log. As the shovels scooped up the grain it reminded me of a bear scooping for honey or ants or berries.

It was amazing how quickly the boards came off as two, three or four individuals worked together to remove a section of the wall. It was also great that the cleanup crew ensured the quick removal of all the splintered, nail-ridden boards. Cooperation was also evident amongst the other teams, as masked partners filled numerous sacks with grain.

In fact, so efficient were the team efforts that by the end of the day almost half of the chicken coop, which had been turned into a grainary structure, was stripped down to its studs with all materials removed and piled in their designated areas. Interestingly, at the one end section, we discovered a little piece of history: 1”x 12-14” rough-hewn planks hidden beneath the siding. They were just about as hard and solid as the day they were installed.

The three perspectives presented during the lunch break were such an absolute intriguing and informative delight: Charlie Russell’s perspective about bear behavior, needs, and challenges. Jeff Bectell’s presentation on the Waterton Biosphere Reserve Associations role in the area and Jennifer Jenkins's perspective of living up close and personal with bears broadened our perspectives about the area’s challenges.

For me personally, implementing strategies for harmony and balance among all living species is crucial in supporting my desire for a peaceful co-existence and therefore sustainability. Adding the three presenters' perspectives to my own personal experiences broadened my understanding that although there are no simple and easy solutions to conflict resolution there are small things that we can do to support a peaceful co-existence.

As we wound down the day by viewing the impressive new grain bins, I made the mistake of taking off my hat. Oh, how the dirt and dust flew.  As my I wiped my brow, the grit clung on tenaciously to my hand. In fact my face and every nook and cranny the dust could penetrate was covered with grit.  Yes, it was a dirty day, a sweaty day, but it was also a great day…for not only were we given the opportunity to support our values but we got to do so while being embraced by nature’s  beauty.  As Jennifer commented at the end of the day, “Everyone was so joyful.”  Yes, that is a truth.  Joy runs deep in the hearts of NCC’s Conservation Volunteers.