Why should we care about Nature Deficit Disorder? 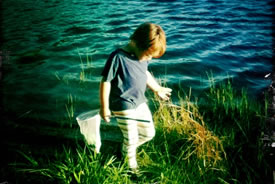 I’ve been spending time outdoors for as long as I can remember, but I can’t begin to imagine what this world would be like without nature. As I grew up I began to appreciate how good I had it — living in a great city like Vancouver, being able to go outside whenever I wanted to and practically living in a forest right beside the ocean. What had changed? Why did I suddenly see myself as so…privileged?

Well, I had started to hear things about different environmental issues and the overall destruction of nature. I thought about how different my life would be if I hadn’t been exposed to nature at such a young age. I pictured the lives of what I’m sure many people live today. Some aren’t so fortunate, living in third-world countries where families must work in dangerous factories, breaking down electronic waste in polluted air or getting drinking water from rivers overflowing with plastic garbage — just to survive.

And I realized something else, now more than ever: people aren’t getting outside and experiencing nature. Most people who are lucky enough to live somewhere near forests, jungles, mountains, lakes, rivers, etc. aren’t going outside to understand the beauty of it all. As a result, they don’t care enough about what’s happening to the environment to do anything to try to save or simply protect what is left of it.

Research tells us that adult concern for the environment comes from participating in nature at a young age and yet 75 percent of parents in Canada say their kids watch TV or play video or computer games after school instead of playing outside. This is because most people are suffering from a condition known as nature deficit disorder (NDD). This disorder refers to the separation between humans and nature, and when I say nature I don’t mean the playground down the street, I mean the natural wilderness.

NDD is not a medical term but perhaps it should be. We are losing our ability to experience nature. Technology is taking over our world and although technology is not always a bad thing, there should be more balance between the time spent on a computer and time in nature. I for one, know many people, kids especially, who live in my neighborhood and instead of spending the summer outside with family, going on hikes or camping trips, will spend everyday indoors trying to beat some high score on a game or update their status on facebook. Nature amplifies time and inspires creativity through the full use of the senses and that can’t come from a computer, a TV or a video game.

When I was 11 years old I met the man who created the phrase nature deficit disorder and who also wrote two books on the subject — his name is Richard Louv. There’s a great quote from one of his books and it goes like this:

"Passion does not arrive on a videotape or a CD, passion is personal, passion is lifted from the muddy hands of the young; it travels along grass stained sleeves to the heart. If we are going to save environmentalism and the environment we must also save an endangered species: the child in nature."

This quote is probably my favorite. It really motivates me and I always like to mention it whenever I’m talking about the subject because nature has given me things to protect, inspiration to be creative. It's given me peace and quiet and a great way to stay healthy. It’s given me things to do and questions to ask. It is a gift. It’s something to be unwrapped and cherished.

Our future and the future of our environment depends on our connection to it. I know it sound like a cliché but it really is never too late to get outdoors and I promise, you won’t be disappointed. So take some time to get outside and let nature inspire you.