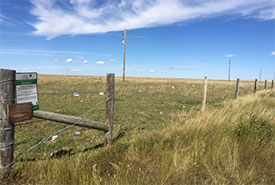 Fence lined with vinyl clips stretch across the prairie at NCC's Wideview property in Saskatchewan. (Photo by Bill Armstrong)

I experienced an unexpected moment of satisfaction at the beginning of a recent Conservation Volunteers (CV) event at Wideview, a Nature Conservancy of Canada (NCC) property in Saskatchewan. As the truck I was riding in topped another rise in this hilly landscape, I saw dozens of sparkles along a barbed-wire fence line in the distance. These sparkles were small lengths of vinyl siding undersill trim, with reflective tape affixed, fluttering in the incessant wind. Six other volunteers and I — along with two NCC staffers — had attached the clips to almost five kilometres of barbed wire at a CV event the previous summer.

"So, that’s what it looks like from a distance,” I thought to myself. Seeing those reflections confirmed for me that the clips had survived the winter, and that they are indeed visible from a distance, which was the whole point of the exercise. 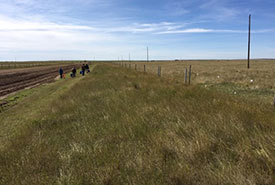 Conservation Volunteers tackling another stretch of fence at Wideview in the summer of 2018. (Photo by Bill Armstrong)

Why spend a day hiking uphill and downhill, clipping bits of vinyl and reflective tape to lines of barbed wire? Good question. The answer has to do with the land and the animals that live on it.

Wideview is actually a complex of five properties totaling 1,222 hectares (3,021 acres) of mixed grass prairie, located in the Milk River Basin in southern Saskatchewan. It is also just a few minutes’ drive from the West Block of Grasslands National Park. It forms a natural buffer area around the park, one of the last remaining areas where greater sage-grouse is found, and the only area in Canada where black-tailed prairie dogs are found.

Earlier in the summer, NCC staff had conducted point counts at Wideview — monitoring bird communities on the property to help inform land management practices. During the 2019 counts, staff may have spotted four greater sage-grouse but, as the birds flew off, they were unable to definitively identify them. If so, that would be the second sighting there.

Back to my question. The greater sage-grouse is a low-flying bird, and the expectation is that the reflective tape will warn them, and other birds and wildlife, of fence lines, reducing the risk of injuries or deaths. 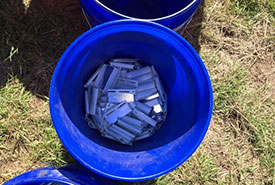 A bucket of fence clips (Photo by Bill Armstrong)

It is important to note that this event was a team effort. NCC staff from the Alberta Region, alongside their corporate Conservation Volunteers partner organizations, cut the vinyl into 7.6-centimetre strips and added the reflective tape. Their handiwork was then shipped to Regina in preparation for this event, where nine of us volunteers placed almost 5,000 clips to another 4.8 kilometres of fence.

It is, I must say, repetitive and tedious work, hardly the kind of glamorous activity often portrayed as conserving nature. However, the rewards are clear: a day spent doing something worthwhile on a spectacular landscape and the image of those reflections in the mid-morning light will stay with me for a long time.