My winter hike at Big Valley 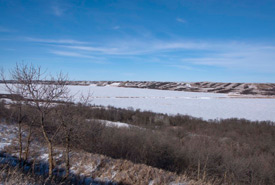 Looking out over Big Valley, SK. (Photo by Bill Armstrong)

The Nature Conservancy of Canada (NCC) has a knack for giving their properties memorable names. On a (relatively) mild February day, I set out to get acquainted with Big Valley, north of Regina, at the southwestern edge of Last Mountain Lake in Saskatchewan. After hiking toward the valley edge, I begin to realize that this was going to be more than an afternoon reconnoiter.

Big Valley was first homesteaded in 1882, but indigenous people likely inhabited this area for thousands of years before then. It was part of the territory ceded to the federal government in Treaty Four in 1874. The land remained mostly within the original homestead family until 2000, and in 2007 it was advertised for sale, with murmurs of cottage or acreage development swirling about. However, a representative of the previous landowner contacted NCC, indicating they would be willing to work with NCC to conserve the land’s natural values. Between 2007 and 2009, NCC purchased four parcels, which now make up Big Valley. 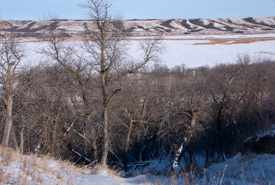 When I reached the valley edge, it was easy to understand why people would be attracted to stopping or building here: the view of the prairie is soul-satisfying. I imagined the sunrises and sunsets would be breathtaking and made a mental note to come back soon and witness a sunrise.

I saw fresh deer tracks, and some older tracks likely made by coyotes. I wanted to follow a trail down into one of the coulees, but even after a string of mild days the snow was deep, and I didn’t relish heading back with boots full of slushy snow.

My camera’s wide-angle lens captured slices of what Big Valley looked like, with the adjoining Valeport Marsh laid out below. The provincial government developed the marsh with the assistance of Ducks Unlimited several years ago to provide enhanced nesting and staging habitat for waterfowl. It has evolved to become a provincial Wildlife Management Area, adjoining Big Valley on its west side. Combined, the two created a larger bird and wildlife habitat, in an area where acreage development had the potential to disrupt wildlife.

I’m grateful that the former owners of what is now Big Valley valued the land and the animals that live on it enough to entrust NCC to conserve and protect it into the future. I’m also grateful that I’ll have plenty more to discover on future visits.