Women in conservation: A promising future (Part one) 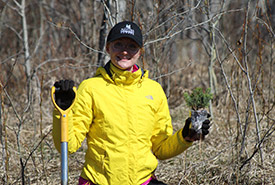 This year, the Nature Conservancy of Canada’s (NCC’s) Regina office has an all-female intern team. That’s six young women, myself included, pursuing conservation work. Over the past month, I talked to my peers about their work this summer and their perspective on the future of conservation.

When I asked the other interns who in their lives encouraged them to pursue the sciences in school or as a career, they talked about their high school teachers and outdoor school programs. But they also made it clear that it was a choice they made for themselves.

Ashley Sahulka, one of our returning natural areas interns, said, “I’ve always just been interested [in environmental science] and felt like I cared about the environment and animals more than the average person, even growing up. I was always curious.”

Her fellow natural areas intern, Lisa Hurst, mirrored Ashley’s sentiment: “I was never specifically encouraged to go into science; I ended up in this field mostly based on my own personal interest.”

Geographic information system (GIS) intern Alayna Chan agreed, “I don’t think anyone came out and told me to go into science, but lots of people fostered my interest.” 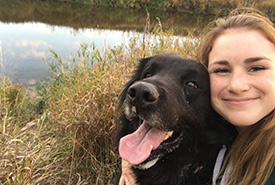 Our conservation engagement intern, Elan Marsall, said, “Everyone encouraged me to go into other things, actually!”

These answers made me wonder if my co-workers would have been encouraged to go into the sciences if they were young men instead. As an English major, I’m pretty disconnected from the changing conversation around women and science today, so I asked my peers whether the reputation of science being a male-dominated field holds true for them as current students and as summer interns.

Kaitlin Baril, another natural area intern, doesn’t think so. “I think that science was once a male-dominated field, but I think that it has definitely changed and is progressing to have a lot of female involvement. When I think about my program at school, most of my classmates are female, and around half of my professors have been female. Most of the people working in NCC’s Saskatchewan Region are female too.”

Kaitlin is right. Twenty of our 27 Saskatchewan Region employees are female. The other interns agreed with her, saying that there seem to be more women working in science, based on their own experiences so far in Saskatchewan and Alberta. However, several of the interns noted that those in more senior science positions still seem to be mostly male, but the interns aren’t discouraged.

“I think it’s important for women to work in the sciences, but I don’t think my experience has been different than that of male students in my classes, which is good,” says Alayna.

These interns are part of the newest generation of women to enter the conservation field, and they brought a new perspective with them. They didn’t have to be told they could go into the sciences, they just knew they could, and did.