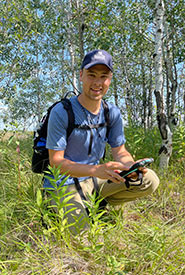 Evan Balzer started as a summer 2021 conservation intern for the Nature Conservancy of Canada’s Manitoba Region and later became the region's engagement coordinator. His background is ecology and evolutionary biology with a focus on mammal behavioural ecology. He graduated with a BSc Hons from the University of Manitoba and an MSc from the University of Waterloo.

Evan has worked on a variety of projects addressing conservation and population biology questions for mammals in Canada, including urban squirrel population structure, narwhal genetics, and endangered bat roosting patterns. He is also passionate about Manitoba’s prairie habitats, and has spent time working with Prairie Originals in Manitoba, where he propagated a variety of prairie plant species and helped develop educational programming.

He is an avid camper, angler, and cyclist, and enjoys getting out to Manitoba’s many parks for canoe trips and fishing expeditions.

A reckoning with bats