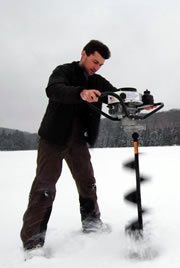 Until December 2015, Nick Lapointe worked as the Nature Conservancy of Canada's (NCC's) conservation analyst and partnership manager. Trained as a freshwater fish ecologist, Nick completed his doctorate in fisheries science at Virginia Tech in 2010. His research has focused on the highest threats to freshwater biodiversity, including invasive species and habitat loss and alteration. His role at NCC focused across biomes, helping the organization to plan conservation actions at landscape scales throughout the country.

Nick is an avid outdoorsman, and spends his free time hunting, fishing, gathering, and gardening in Ottawa’s hinterland according to the season.

Can battling invasive species be a mistake? (Part One)

Can battling invasive species be a mistake? (Part Two)

It all adds up: The surprising variety of ways conservation scientists use math daily

Why does biodiversity matter? The diversity of life on Earth matters a lot…no matter how you look at it