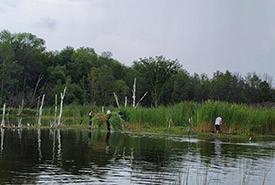 When I started with the Nature Conservancy of Canada (NCC) in the spring of 2022, I had limited knowledge of the invasive species called phragmites (phrag, as many in the conservation circle call it), and also known as common reed, the immense effects it has on our native ecosystems, and the countless local plants and animals it negatively impacts. But over the summer, I learned how just invasive this plant is. To battle it, I learned that I would be participating in “Phrag Week,” an annual week-long event of the Central Ontario – West sub-region, where my internship was based, where we all travel up the eastern Georgian Bay coast and take part in the removal of Phrag with NCC’s conservation partners.

In preparation for Phrag Week, I did some reading on the species. Phragmites australis australis is believed to have first arrived in North America around the beginning of the 20th century and has since spread across the continent. Although the exact origins of how the species came to Canada is unknown, one thing is for sure, the species is highly invasive! While its preferred habitat is wetlands, phrag also thrives in recently disturbed areas, like human-made ditches and roadsides. It doesn’t take long for phrag to establish itself and, once it does, it can outcompete native plant species, obstruct recreational opportunities for people and even make our roads more dangerous by impeding sightlines.

Needless to say, phrag is out of control, so how do we control it? First off, we need to make sure we are controlling the correct species, so I had to learn how to identify the plant correctly. Some key things to look for when identifying Phrag are large, dense stands of three-to-six-meter-tall grass, green to blue-green in colour. In August, these grasses grow large fluffy seedheads, a telltale characteristic.

Once you have identified an invasive phrag patch, there are two main methods of control: chemical and mechanical. Chemical control consists of spraying the plant with herbicides, which is highly effective. When herbicides are unavailable or unable to be used, mechanical control is also an effective method, which is what we used during our Phrag Week.

With Phrag Week upon us, we headed up to Georgian Bay and connected with partner organizations: Georgian Bay Forever and Georgian Bay Land Trust. Our combined goal was to control phrag stands submerged in water, using the “cut-to-drown” mechanical control method, which is simple, easy and effective. We used raspberry cane cutters to cut the phrag stalks under the water, as low to the base of the stalk as possible, and then we piled the cut stalks high on shore to dry out and die. This method essentially drowns the phrag roots, which help the plant spread and is especially effective in later summer months when most of the plant’s energy is being put into forming seedheads rather than roots. However, it’s also important to return annually to ensure any returning growth is dealt with. 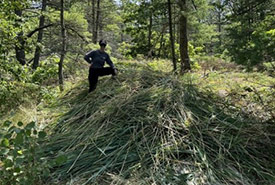 I also learned that other mechanical control methods for phrag not submerged in water are much less effective, and some can even cause the plant to spread more rapidly! This is why it is so important to use the Best Management Practices when controlling it. Additionally, I discovered how extensive the invasive control efforts are across Georgian Bay by other conservation organizations, and how essential it is for everyone to do their part to help control this invader.

Controlling phragmites is a team effort

Luckily, NCC is working on connecting with all kinds of organizations and municipalities in the fight against phragmites. I helped create a map of invasive phrag along the eastern Georgian Bay coast, for which my supervisor and I spent countless hours driving all over finding and identifying the plant.

To do this we had to use our phrag goggles. No, these are not actual goggles that detect phrag — although that would be handy — we just found that once you start looking for phrag, you can’t stop seeing it! Now everywhere we go, we are automatically on the lookout for phrag, because once you turn your phrag goggles on, you can’t turn them off!

Our invasive phragmites control work wouldn’t have been possible without the generosity of our funders, specifically the Ganawenim Meshkiki’s Eastern Georgian Bay Initiative, and our amazing volunteers and conservation partners. And as invasive phragmites continues to pop up in more places and spread everywhere, I learned that when everyone in the community gets involved, success in the fight against this invasive species becomes possible. 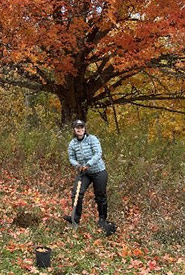 Amanda Henderson joined the Nature Conservancy of Canada as a conservation technician intern with the Central Ontario - West team in the spring of 2022.