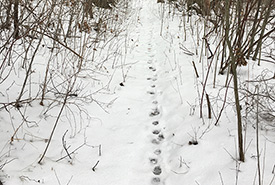 Tracks of a coyote walking - note the straight track pattern. (Photo by NCC)

It isn’t a secret that most city dwellers have complicated relationships with winter (myself included). When the weather takes a turn for the worse, it seems to have a domino effect on urban centres, increasing traffic and slowing everything to a halt. I used to roll my eyes every time it started to snow, but this year I’m planning on doing things a bit differently ― with the help of some furry friends.

During my daily treks to and from work, and during my weekend hikes, I’ve started looking down and around for evidence of local wildlife ― whether through their tracks, middens (feeding evidence) or scat (that’s poop!). Turns out, I’m not alone. 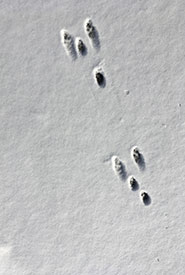 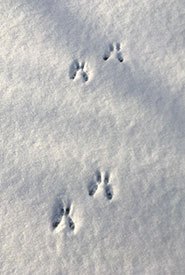 Depending on the habitat you’re walking in, and where in Canada you are, the types of species will differ. For example, you’ll see different animal signs when walking through a forest than you would in a residential park. The most common tracks to see in both of these areas might include rabbit, such as eastern cottontail, or red or grey squirrel. These species’ tracks appear a bit backwards to us two-legged, upright humans. Their bigger hind feet appear in front of their smaller, front feet. You can tell the difference between the two, as squirrel prints are side by side (with grey squirrels being twice the size of red squirrels). Their tracks usually lead to a tree, while rabbit tracks are more staggered and roughly make the shape of a triangle.

Other signs of urban visitors you might come across include mice, voles, raccoons or opossum tracks. Mice and voles tracks are small and even, and sometimes leave a tiny mark from their tail. In deeper snow, look for tunnels just under the surface, where these rodents find food and warmth. Raccoon and opossum tracks are my favourites, since they look like tiny hands in the snow.

If you’re really lucky, you might come across some fox or coyote prints. Depending on the density of the snow, you might see a neatly indented paw print. If the snow is deep, it could look like an oval-shaped print. Either way, these species tend to walk by putting one paw in front of another, creating a narrow, straight track. Unlike dog tracks, which tend to wander more, coyotes and foxes usually walk in straighter lines. 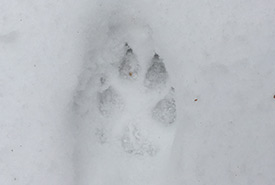 There’s something special about seeing a wild animal in its natural environment, but seeing the signs they leave behind — but not necessarily the individuals themselves — is like solving a mini-mystery. I love seeing a track preserved in the snow and trying to decipher which species could have left it.

Recently, I was walking my dogs and found a pristine track along my driveway. It seemed as if an eastern cottontail had made its way along my walking route, almost walking paw in foot with me. I looked around to see if I could spot it, but, alas, it was gone.

As a former winter-whiner (definition: an individual who complains about winter weather conditions non-stop), I’m learning to embrace the white, fluffy stuff, and tolerate the fact that for most of the time between December and March, I can’t feel my face. By visiting a Nature Conservancy of Canada property, I can look for evidence of my favourite animal frolicking about and know that the one thing that makes someone truly Canadian is braving the cold.