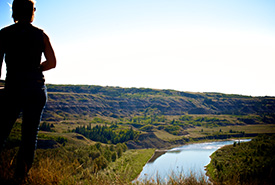 Nestled near the Red Deer area lies a Nature Conservancy of Canada (NCC) property unlike any other. Just 49 hectares (121 acres) in size, the Fyten Lea property has a wide variety of ecosystems within relatively close proximity. Aspen forest, mixed spruce forest, shrublands, wetlands, grasslands and badlands are found here.

The property is situated along the Red Deer River, near a riparian zone. Riparian zones are areas of vegetation that can be found bordering a body of water. They help maintain the health of the waterbody they surround, which in this case is the river. Riparian zones do this in a few ways: by helping regulate the river’s temperature, preventing erosion and helping filter out harmful pollutants from runoff before they enter the water.

A wide range of plant and animal species are concentrated in this area. They are able to thrive thanks to the wide variety of ecosystems found on the property.

In the hot, dry and barren conditions of the badlands on the slopes of the property, creeping juniper can be seen. Further up the slopes, visitors should look out for blue grama grass. This species is said to resemble eyelashes because of the way the flowers arrange themselves on the stem.

There are several different types of flowers on the property. The most common is shooting star, which blooms in the spring and is found in stream banks, salty flats or wet meadows. Its distinctive swept-back petals are often light pink, lavender or white. Near the riparian zone, willow and horsetail grow near the water’s edge. Edible berries, such as wild strawberries and raspberries, are a sweet treat found on the property in the later summer months.

A wide range of animals also have been spotted in the past on the Fyten Lea property, including red squirrel, beaver, mule deer, coyote, Canada lynx, white-tailed deer and moose. Visitors with a passion for birdwatching should keep their eyes peeled for species such as ruffed grouse and red-tailed hawk.

The power of conservation

The Fyten Lea property is located in an area that has been deemed so important that is it part of the larger, nationally designated Lousana Canyon Environmentally Significant Area.

Across the country, cities and development are sprawling rapidly, putting natural areas and their inhabitants at risk. This area is conserved, which will ensure that the ecosystems and the species they sustain will continue to survive and flourish for the long term.