Least sandpiper in a wetland (Photo by Sean Feagan/NCC staff)

No Rest for the Winged 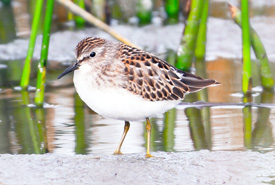 How far can you travel without a break to rest and eat? For many migratory birds, wetlands serve as key pit stops on epic journeys spanning thousands of kilometres between their overwintering habitats in the south and breeding grounds in the north.

Imagine you always drive the same route to visit your family. It’s an awfully long drive, but you always make it. That is likely because at the halfway point, there’s a small gas station with a café where you can refuel, relax and enjoy a delicious lunch.

Now, imagine that your trip is thousands of kilometres long and you must flap your arms the whole way!

That is what entire populations of hundreds of species of migratory birds must do every spring and fall. 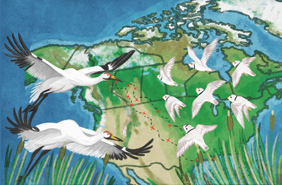 During migration, many species of birds follow a similar route, known as flyways, year after year. In North America, one major migration route is the central flyway, where birds travel from the Gulf of Mexico to as far north as the Arctic Ocean, via the Great Plains. Here, birds such as shorebirds, waterfowl and cranes follow a consistent path that intersects with important stopover habitat: wetlands.

Flying thousands of kilometres takes a massive amount of energy, and wetlands offer a rich assortment of food, including plants and invertebrates. By feasting on these foods, birds replenish the energy stores they depleted while flying long distances.

For many birds, migration stops once they arrive at the right wetland. This is because wetlands are the primary breeding grounds for many species, and offer the food and shelter required for nesting and raising young.

In Canada, over 200 bird species depend on prairie wetlands in the Prairies for food and habitat, including at risk species, such as piping plover and whooping crane.

Why do these species matter? Apart from being irreplaceable threads in the delicate web supporting all life on Earth, migratory wetland birds also provide benefits to humans, including controlling pests and invasive species and providing recreational birdwatching opportunities and stimulating local economies.

A bump in the road

Thinking back to our driving analogy, imagine as you round the corner to that gas station and café oasis — famished, tired and nearly out of gas — it's gone. Maybe instead there is a parking lot or a farmer’s field, but nothing else.

That is an all-too-common experience for many migratory birds.

The deep nutrient-rich soils of wetlands are coveted for agriculture and human settlement; approximately 20 million hectares of Canadian wetlands have been drained and converted since the 1800s — that’s 70 per cent of our wetland habitat.

Fewer wetlands mean many migratory birds have fewer places to stop and recharge on their journey.

Conserving wetlands for birds and people

Considering all the benefits healthy wetlands offer to both birds and humans, conserving our remaining wetlands is a priority. To achieve this, we need to take immediate action to accelerate the pace of land conservation in Canada, a primary goal of the Nature Conservancy of Canada (NCC).

One tool we can access is the North American Wetlands Conservation Act (NAWCA), a grant program administered by the U.S. Fish and Wildlife Service. NAWCA provides funds for conservation projects across the U.S., Canada and Mexico to protect, restore and enhance habitat for waterfowl and other wetland-dependant species.

Through this program, your donations to eligible NCC projects featuring wetlands — such as The Yarrow Ranch of southwestern Alberta — will do double-duty, thanks to the matching funds provided by NAWCA.

Donating to NCC helps secure conservation funds for wetland conservation, and, through NAWCA, your conservation dollars can make a bigger splash! Donate today.