A major conservation investment by the Government of Quebec 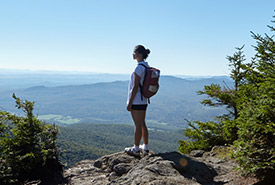 The partenariat pour les milieux naturels project (PPMN) is a grant of more than $13 million from the Ministère de l'Environnement et de la Lutte contre les changements climatiques (MELCC) to the Nature Conservancy of Canada (NCC). This grant, spread out until 2022, will contribute to the development and consolidation of Quebec's network of protected areas on private land, particularly in the southern part of the province, where biodiversity is the richest and pressures on ecosystems are the greatest.

The project has three main components:

The PPMN is an updated version of a proven partnership. The PPMN grant follows a $15-million grant to NCC for the Ensemble pour la nature project (PEPN), which went from 2017 to 2020.

"NCC is honoured by the confidence that the MELCC has in us, which is shown through their contribution to the PPMN grants," says Hubert Pelletier, director of partnerships for NCC’s Quebec Region. "By working together, we gain in efficiency and strengthen our expertise, allowing us to have a greater impact in conserving our precious natural heritage."

The PEPN, which ended on March 31, 2020, resulted in the protection of 7,230 hectares (17,866 acres). More than 80 per cent of the securement projects carried out under the PEPN contributed to the protection of habitat for at-risk species, 54 per cent was directed toward wetlands. This attests to the undeniable conservation value of the areas that were protected.

The PPMN grant to NCC will have a significant leverage effect, as it comes with a matching-funds obligation. The Government of Quebec's contribution must be matched by NCC and our partners with at least an equivalent amount from federal or private funds.

As a result, NCC is appealing to the generosity of philanthropists — individuals, foundations, corporations and others — to double the Government of Quebec's contribution. Private sector participation is essential to the protection of more extensive, ecologically rich spaces.