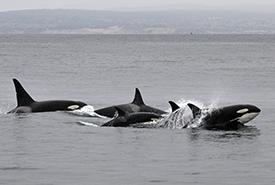 If you thought human families were the only relatives with complex relationships, think again. In honour of Family Day, check out some of the animal kingdom’s fascinating families below:

Orcas (also known as killer whales) are highly social marine mammals. They live in groups called pods, which are comprised of matrilineal families with matriarchal hierarchies. This means that the pod’s oldest females keep order and discipline among their offspring and descendants. They also model particular behaviours to younger individuals.

Orcas are known to share meals with one another, especially mothers with their calves. For example, mother killer whales, which prefer to eat salmon, have been observed to hold salmon in their mouths as their calves feast on it. Older females are more willing to share food with pod members other than their own offspring, as they are more focused on the pod’s success as a whole.

African elephants live in small family groups made up of six to 12 members — a matriarch along with its offspring, sisters and their offspring — that remain together for their entire lives. Adult males usually live alone, but some have been known to live in small groups of three to 14 bulls.

Typically, the oldest and largest female in the group acts as the leader, bringing her years of experience and natural leadership abilities to the forefront. Matriarchs have a heightened memory for individuals and locations and are the group’s decision makers, deciding when and where to feed, when to travel and when to engage in combat and how. Relying on a wiser and older female’s experience and establishing nearly lifelong relationships enable the passing along of crucial survival skills to future generations.

Female elephants within a family forage, rest and move together. They also help take care of one another’s calves, a phenomenon called alloparenting. Some will even go so far as to nurse one another’s calves. Elephant families are so tight-knit that some have been observed to mourn over family-member deaths, coming back to the places where they died. 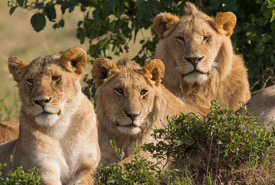 Lions are highly social and are the only feline species that lives in family groups, called prides. Each pride consists of up to three males and approximately 12 related females and their offspring.

Males protect the pride’s territory by roaring at and chasing away intruders. Females, on the other hand, hunt and parent co-operatively. All females in a pride mate simultaneously and, as a result, give birth around the same time. Female lions give birth away from the pride, keeping their cubs hidden during their initial six weeks of life. After this period, females look after one another’s cubs and even nurse those that aren’t their own.

To prevent its offspring from eating each other after they hatch, the female strawberry poison dart frog carries each tadpole on her back up into the trees and drops it into a separate pool of water from where the tadpole hatched. Over the next 50 days, the female visits each separate pool daily, where she lays an unfertilized egg to feed the tadpoles. Males, on the other hand, constantly guard the territory to prevent rivals from locating the tadpoles. 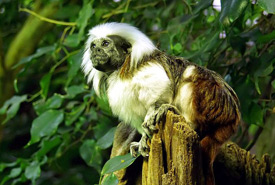 Cotton-top tamarins, a monkey species, parent co-operatively. Within a social group, every adult male and female provides food and resources to the infants. Dominant females will even prevent subordinate females from reproducing to make sure that only one pregnancy takes place at a time.