60 things – A year to remember 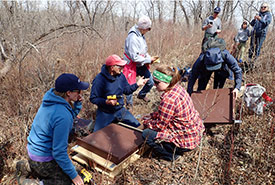 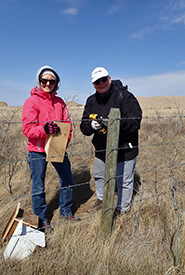 On day 72 of the year, I embarked on the 14th item on my list: installing birdhouses. (Photo by NCC)

My friend Cathrin asked me if I’d be interested in joining her in volunteering with NCC to help put up birdhouses. “Sure! What’s NCC?” I had never heard of it. She told me it was the Nature Conservancy of Canada and that they had some projects on the go in Saskatchewan and were looking for volunteers. At this event, we would be installing birdhouses for mountain bluebirds and tree swallows on their Fairy Hill property in Saskatchewan. I’m a birder, and bluebirds are one of my favourites. They are such a beautiful blue! So, anything I can do to keep them around or help increase their numbers, count me in!

We drove to Fairy Hill, which is about 30 minutes north of Regina. It was cold and windy, but at least it wasn’t raining. We met up with 20 other volunteers and broke into two groups. One group was assigned trail clearing and the other was to install 29 birdhouses and two bat houses. Cathrin and I opted for the group that was putting up the houses. 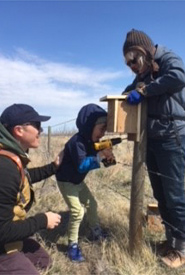 We carried the houses along the fence line and installed one on every fifth fence post. (Photo by Deb Froh)

We carried the houses along the fence line and installed one on every fifth fence post. NCC staff explained that the birds will not use the houses if they are too close together. They like their own space — just like us. Battery-operated power drills made the job pretty quick (once I figured out how to turn the power up on my drill, that is — duh!).

After a couple of hours, we stopped for lunch, did a tick check (I found one on my neck and flicked it away), then went on to install bat houses.

I had never seen bat houses up close before. They were about 61 centimetres wide by 66 centimetres tall, made of two sheets of stained black plywood with space in between so that the roosting cavity was only about two centimetres wide. It was open at the bottom, and the back piece of plywood was longer than the front piece and scored at the bottom so that the bats can land on it and climb up into the house. 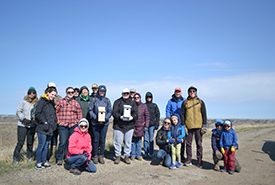 It was a cold but interesting day, and I’m glad I went to this event. (Photo by NCC)

We screwed the two houses on to opposite sides of a long pole, then raised the pole up and screwed it to a fencepost so that the houses were about four metres off the ground. We were told that the bats that might use these houses — big brown bats, little brown bats and silver-haired bats — typically roost in cavities made by other species, such as woodpeckers, but those cavities can often be hard to find. These houses will help them find places to live. Each house can hold up to 100 bats!

It was a cold but interesting day, and I’m glad I went to this event. Thank you Cathrin and thank you NCC. I would volunteer for NCC again! 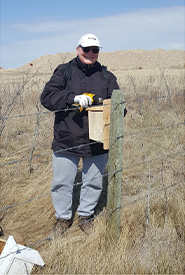