A walk in the woods: Enchantment in the subalpine 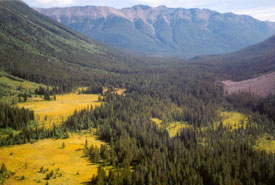 Enchantment Valley, BC (Photo by NCC)

I grew up in southern Ontario, and have spent nearly all my life living in urban areas. Despite this, I found ample opportunity to spend time in the forest. Most years, I camped with friends or family at Algonquin in the Great Lakes-St Lawrence forest. In the summertime I hiked parts of the Bruce Trail with my wife and son, exploring the species-rich Carolinian forest. I spent time in the urban forest, too.

My first job out of university tasked me with creating an inventory of trees in Toronto’s urban deciduous forest in the Annex neighbourhood. The urban forest was a familiar friend.

This changed in the summer of 2015, when I embarked on a cross-country move to British Columbia to work as a stewardship assistant with the Nature Conservancy of Canada (NCC). With the new topography came different species and ecosystems. Suddenly, the forest wasn’t so familiar.

Standing in a valley bottom, the trees form a dense green blanket climbing up the side of the mountain and are eventually replaced with rock and snow.

Enchantment: it’s not only the feeling you may be overwhelmed with when standing in British Columbia’s subalpine forest, but it’s also the name of one of NCC’s properties in the western Chilcotin District of the central interior of British Columbia. Nestled in a hanging subalpine valley approximately 1,340 metres above sea level, Enchantment is true wilderness. The property can be accessed only by helicopter or by multi-day bushwhack through dense vegetation and steep, uneven terrain.

Arriving at Enchantment, you are in the subalpine, situated at the doorsteps of Sleepwalker Peak, Cloud-Drifter Peak and Ottarasko Mountain. The temperature is cool and, despite shelter from the adjacent mountains, the wind is strong.

If the view isn’t telling enough, the trees serve as a reminder of where we are. Engelmann-white spruce hybrids dominate. They are characteristic of mid-elevation subalpine forests as an intermediate between the Engelmann spruce at higher elevations and white spruce at lower elevations. Also abundant are subalpine fir, which have replaced the Douglas-fir found at lower elevations. Lodgepole pine are scattered throughout, hinting at fires that burned the subalpine valley in years past.

Vertical, treeless strips along the mountainside mark where avalanches raced down the slopes, sweeping away the trees in their path. Hidden amongst the maze of mature coniferous trees are fens, subalpine meadows and several creeks, all of which provide important habitat for the diversity of plants and wildlife that thrive in the subalpine.

Navigating the forest can be done by following trails that are maintained by the conservation area’s regular users: the wildlife, that is. Grizzly and black bears, wolverines, mountain goats, moose, wolves and cougars are some of the animals that live in Enchantment and the surrounding landscape. These animals, among others, rely on the health of the forests and associated high-elevation habitat found in British Columbia. This reinforces the importance of NCC’s work in the subalpine, where conservation of the few private parcels occurring at high elevations helps to protect functioning ecosystems throughout large tracts of wilderness.

Every walk in the woods is different. Sometimes when I walk with my family, I am reminded by my son of the curiosities and wonders that are hidden among trees. Other times, I walk alone and experience the not-so-silent silence that can only be found in the forest. Or I may explore the forest at work (which I am, of course, so lucky to do), documenting its conservation values and rediscovering just how important these functioning ecosystems are.

Whether the walk is through a small forested community park or through the subalpine forest of British Columbia, and no matter the purpose, each walk through the woods can be both familiar and unfamiliar, humbling and enchanting. 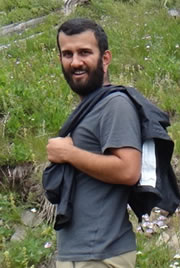 Jon Kelly is the regional stewardship assistant in British Columbia.