Wetlands help purify fresh water for billions of global citizens. Like giant sponges, they absorb and replenish water, holding water during floods and providing water to rivers and streams during drought. Wetlands also provide vital nesting, breeding and staging grounds for waterfowl and many other species, and they are among the planet’s most diverse and productive ecosystems. And that’s barely skimming the surface of the wonders of wetlands.

In spite of their important roles, our world’s wetlands are facing serious woes.

The Nature Conservancy of Canada (NCC) has protected wetlands across the country for the benefit of wildlife and people for over 55 years. Through the development of Natural Area Conservation Plans, we identify the places that most urgently need conservation. We then partner with private landowners, communities, governments and other organizations to conserve these important habitats — including wetlands, floodplains and shorelines.

To date, NCC has secured over 387,000 acres (156,613 hectares) of wetland and associated habitats for migratory birds and other species under the North American Wetlands Conservation Act (NAWCA). 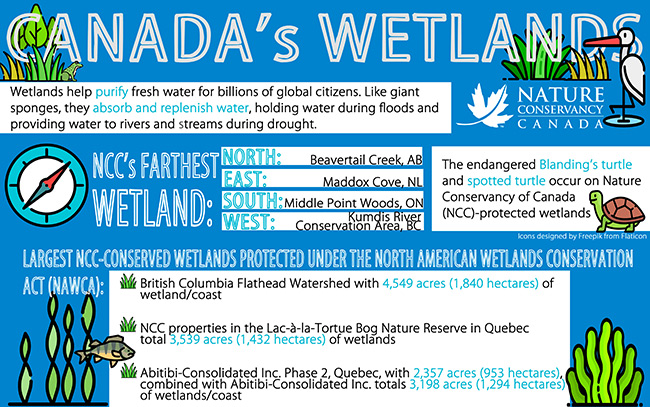 Here are some facts about NCC-protected wetlands across Canada:

Where is NCC’s most northern wetland?

Where is NCC’s most southern wetland?

Where is NCC’s most eastern wetland?

Where is NCC’s most western wetland?

Most endangered wetland species on an NCC property

Blanding’s turtle and spotted turtle (listed as endangered by the International Union for Conservation of Nature) occur on NCC-protected wetlands in Ontario and Quebec.