Backpack Essentials: On the open road

This blog post is part of the Backpack Essentials series, a series that explores the items that Nature Conservancy of Canada (NCC) staff carry with them when heading outside. It is inspired by the quarterly Nature Conservancy of Canada Magazine and our Nature Destinations program. To learn more about NCC’s properties across Canada that you can visit, check out naturedestinations.ca.

Under the blazing Kelowna sun, Travis Muir stood by his bike and looked to the open road ahead of him. There were no cars, traffic or stoplights, just mountains, greenery and a sense of curiosity pushing him forward.

As the former conservation and engagement coordinator for the Nature Conservancy of Canada’s (NCC’s) BC Region, Travis loved spending his working days outdoors, whether it was removing invasive species or speaking with local volunteers. But he realized that he always had a craving for adventure. With just a bike and the company of a few friends, Travis decided to fulfill this craving by taking a journey from Kelowna to Victoria, BC.

When we caught up with him halfway through his journey, he was holding a glowing iPhone with the iNaturalist app on display. Wearing his NCC T-shirt, Travis had not forgotten about all the conservation work he performed as a staff member at the organization. Whenever a species caught his eye in the middle of his trip, he always made time to catalogue it and research its status on the app. 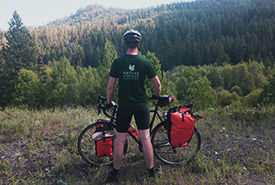 Wearing his NCC T-shirt, Travis had not forgotten about all the conservation work he performed as NCC staff. (Photo by Travis Muir)

“I’m still learning about species while I’m travelling,” says Travis. “Not only that, I’m also contributing to such a large citizen science platform.”

iNaturalist allows anyone — not just conservationists — to upload pictures of species they encounter and engage in a public forum to confirm its identity. The picture is then added to the species’ profile. The information, such as location, along with the picture contributes to a database of rich information that will help organizations with biodiversity monitoring. The photo may even be used on blogs like NCC’s Land Lines. 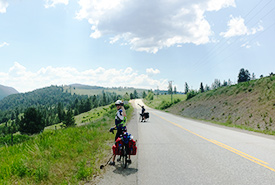 Travis on the open road. (Photo by Travis Muir)

Of course, not everyone has the chance to embark on such a breathtaking multi-day journey on BC’s tranquil roads. To experience something equally beautiful in just a day, Travis recommends Chase Woods, an NCC property on Mt. Tzouhalem in the Cowichan Valley, BC.

Hiking up the mountain is challenging but incredibly fulfilling, he says. A cross on the cliffs sits like a trophy for those who make it to the top, rewarding hikers with beautiful BC scenery. While a photo of the views or the cross is a must, don’t forget to take pictures of some cool species to upload to your iNaturalist account, too, reminds Travis.

Travis is still on his adventure. The open road before him seems endless, and he is excited to see where it will take him.