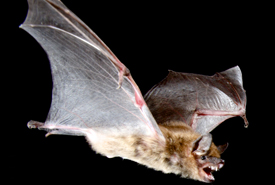 Having studied bats for more than a decade, I have been fortunate to be able talk to students in their classrooms while doing bat presentations, or to landowners while I trapped bats on their properties.

Everyone has a bat story. Everyone loves bats, even if they don’t know it yet. Interestingly, though, many people have no idea what kind of bat they’ve seen. Usually it’s a “big brown” or a “little brown,” but there are many other possibilities.

Saskatchewan is home to eight known bat species. Using mist nets set up in yards and on roofs, or acoustic recorders tied to trees, I have helped homeowners and landowners identify bats on their property. These identifications are important not only to them, but often to science.

Perhaps you have a maternity colony of the now endangered little brown bat living in the attic of your garage, or a colony of silver-haired bats in the trees behind your home. Many Canadian bat species form these majority-female maternity groups in the summer to give birth to and rear young. Knowing which species of bats exist on the landscape is an important first step in being able to conserve their habitat.

This past summer, the Nature Conservancy of Canada (NCC) had me identify bat species on several NCC properties at the edge of the aspen parkland around Spiritwood, Saskatchwan,  and near Regina. All bat species have a distinct echolocation “voice,” allowing for identification. The variation in their echolocation voice is often due to differences in habitat use and prey selection. For example, the hoary bat uses a long, low frequency call for identifying prey over greater distances, compared to the little brown bat, which has a higher frequency, shorter call for finding closer prey.

A recording of a silver-haired bat making "kill buzzes." When the bat is approaching an insect, the calls seem to speed up because the echo that the bat is receiving is of a decreasing duration the closer it is to its prey.

A recording of a little brown bat doing "search phase" calls, meaning it is looking for prey. 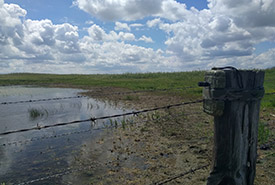 I installed two acoustic recorders on NCC properties (Meeting Lake, Nebo and Edenwold). After locating suitable foraging locations, I set up my recorders and began recording. The recorders are set to turn on automatically around sunset and record passively until sunrise. The bats have no idea they’re being recorded and so the recordings provide an accurate picture of the bat species present in the area. The recorders are left out for at least a week at a time to account for differences in activity ― if it’s very windy, cool or raining, insect activity and, therefore, bat activity declines. 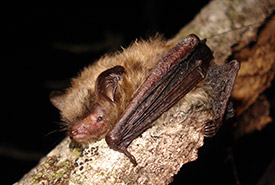 To my delight, the endangered northern long-eared bat was found on two properties and the little brown bat was found on all three of the aspen parkland properties. The northern long-eared bat is a forest interior specialist ― it forages along cluttered trails within the forest and so it has somewhat specific habitat needs. The eastern red and hoary bats were found on all properties ― both of these species often roost on the boughs of mature trees so forest conservation on these NCC properties is important.

In all, seven of the eight Saskatchewan bat species were represented on the NCC properties. This baseline data is important for helping NCC create appropriate management plans to provide suitable foraging and roosting habitat for bats on their properties for two weeks each during July — the bats’ busy season. This is the period when females move farther from their maternity colonies to forage and when juveniles are learning to fly and explore the world around them. These properties, which are in the aspen parkland, all have ponds and lakes within their borders — perfect for foraging bats that rely on insects for food. 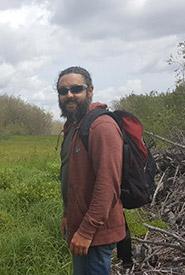 Joe Poissant is a bat expert/enthusiast who uses his research experience to aid individuals and organizations with everything bat related.