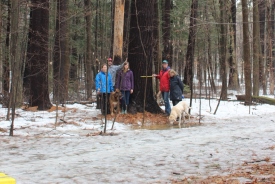 Nature does not thank us for protecting nature reserves. But left to its own devices, it does offer up hidden rewards and ecological gifts for us to discover.

We just found one of these natural gems in a Nature Conservancy of Canada (NCC) property west of Ottawa.

Gillies Grove is a 56-acre (22-hectare) old-growth forest along the Ottawa River that is a beloved natural feature of the Town of Arnprior and adjacent Township of McNab-Braeside.

“The Grove” was once the owned by Daniel McLachlin and later by David Gillies, both great figures in the history of logging in the Ottawa Valley. They spared this stately forest of hardwood and pine and it became the wooded promenade for their families and local townspeople for generations. The trees also shaded the magnificent Gillies mansion, itself built from pine from The Grove. Together the woods and home are designated as a National Historic Site.

Fast-forward to the current millennium and the Grove became threatened with development. In a story like many across the country, a band of community members rallied to protect this irreplaceable natural asset.

It started with a Save the Grove committee and continued with a land trust called the Land Preservation Society of the Ottawa Valley. Working with help from the Nature Conservancy of Canada, the groups raised the money to buy the property. In 2001 they did just that and the Grove became an NCC nature reserve. It stands as permanently protected old-growth woodland; a rare remnant of the former forests of the region. The Friends of Gillies Grove now help care for the reserve.

The Grove is a beautiful piece of Ottawa Valley natural history. Its old maple and beech trees have provided habitat for reclusive red-shouldered hawks. Its hemlocks are the hiding place of owls. But the Grove’s claim to fame has always been the towering white pines in the heart of the property. These pines draw the daily admiration of local people and visitors on countless walks along its easily accessible trails.

Along one of these trails, hidden in plain sight, is a forest giant. 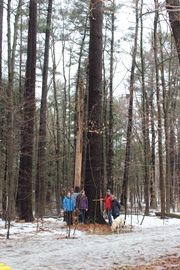 On April 10, 2015, Steve D’Eon, a registered professional forester working for the Canadian Forest Service, discovered Ontario’s tallest eastern white pine smack dab in the middle of Gillies Grove. Steve was invited by NCC to follow up on hunches and cursory measurements made a decade earlier. He brought state-of-the-art measuring devices, and another forester as a witness, and measured one magnificent tree to be a whopping 154 feet; by all accounts the tallest white pine, and therefore the tallest tree, in the province.

The tree is healthy and still growing, so in time it may reach the height of former giants, like the 162-foot Thessalon pine that fell to the ground in 1997. It is also surrounded by similar specimens — likely all borne of the same fire or other disturbance that got this stand started more than a hundred years ago.

White pine is the official tree of Ontario, and the rise and fall of early white pine logging was an important chapter in the province’s history. So having the tallest specimen in a nature reserve is something to be proud of. These tall trees may also be a source of genetic diversity of eastern white pine, as the original giant pines were all but liquidated from the species' range over the last century.

The Grove pine now joins the many white pine all-stars of Ontario’s forests. These include ancient white pine of Temagami, old-growth pine reserves in Algonquin Park, impressive protected pines in Greenwood Lake Conservation Reserve west of Thunder Bay and the many great stands and outstanding individual pines that adorn our landscape.

It is possible that our claim to Ontario’s tallest white pine will be short-lived. It may inspire another forest sleuth to turn a measuring device skyward and finds an even taller pine. This is as it should be, and I sincerely encourage them (to take their time doing it).

For now, and hopefully for a while yet, let Gillies Grove, Arnprior and McNab-Braeside bask in the limelight. They are fortunate to be blessed with this treasure of biodiversity, this natural skyscraper, and I know they will welcome visitors to share it with them.

Postscript – I was the volunteer president of the Land Preservation Society of the Ottawa Valley when the Grove was protected. The forest and the people who fought to save it have a special place in my heart.

Recently one of these Friends of the Grove, and a personal friend, Gerry White, passed away. Gerry was a regular Grove walker and a vital volunteer monitor and steward in recent years. Gerry left us the very week that the great pine discovery was made.

NCC and Friends of Gillies Grove are installing a bench in the Grove in honour of Gerry, and it will be facing the tallest pine. Some of Gerry’s family joined Steve D’Eon on his quest for the giant pine, and Gerry’s son William signed the form to nominate the Grove pine to Forest Ontario’s Provincial Honour Roll of Trees.

Many, many people helped protect and care for the Grove’s pines over the years, but it did not take long for me to start thinking (unofficially) of this great tree as the “Gerry White Pine.” It honours Gerry, for sure, but it also pays homage to the decades of volunteers like Gerry who helped saved the Grove, and this great tree, for us all to enjoy today.