Bring Back the Bluebirds: Putting translocation to work to restore a rare ecosystem’s flagship species 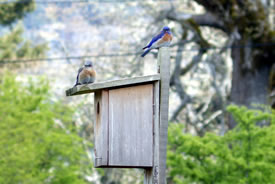 In 2014, this breeding pair of western bluebirds returned to NCC’s Cowichan Garry Oak Preserve to nest for a second year in a row. (Photo by Jemma Green, GOERT)

As recently as 60 years ago, the gentle, vibrantly coloured western bluebird was a common occurrence in the species-rich Garry oak meadows and savannahs of the Salish Sea region of British Columbia and Washington. But as their habitat became fragmented and degraded by urban and agricultural development in the latter half of the century, the species’ nesting cavities — holes formed in old, decaying oak trees — became increasingly scarce. Unable to compete for limited nest habitat with introduced, invasive European starlings and house sparrows, the western bluebird population steadily declined before disappearing from the region altogether in the mid-1990s.

Fortunately, there is hope for the western bluebird. Today, the species is recovering throughout Washington thanks to decades of habitat restoration, nestbox programs and species reintroductions.  Following suit, Bring Back the Bluebirds formed in 2011 to work with Vancouver Island communities to reintroduce western bluebirds in Canada’s Garry Oak ecosystems.

To re-establish a founder population, Bring Back the Bluebirds developed a translocation program that would transport and release as many as 10 bluebird pairs from a large, recovered population in southern Washington to Vancouver Island each breeding season for five years. The Cowichan Valley, which is strategically located near the centre of the bluebirds’ former breeding range and contains some of the largest and best areas of Garry oak habitat remaining in Canada, was selected as the reintroduction area. 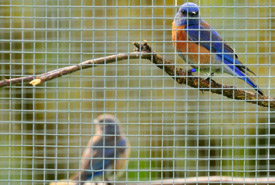 A pair of western bluebirds in their temporary aviary, Cowichan Garry Oak Preserve, BC (Photo by Tim Ennis/NCC)

The translocated bluebirds would be reintroduced using a “soft release” approach, in which each pair is held in a temporary aviary at a release site to acclimatize and familiarize themselves with the sights and sounds of their new habitat before being released. Throughout the holding period, the bluebirds would be cared for and closely monitored by a technician: pairs would be held until they started to exhibit breeding behaviour, while bluebird families (pairs translocated later in the breeding season with their first brood of nestlings) would be held in an aviary until just after the nestlings fledged.

In this way, each release would be timed to increase the likelihood of a successful reintroduction. The bluebird pairs would be ready to mate and build their first nest, while families would stay together near the release site until the young were old enough to fend for themselves, often establishing a second nest during this period.

2012 was the pilot year for the project. To address the main cause of the species’ decline and provide nesting habitat for the bluebirds that would be released, project partners worked closely with private landowners throughout the Cowichan Valley to build and mount nestboxes at the release sites and other areas of suitable habitat. Once dozens of nestboxes were in place, translocations began. 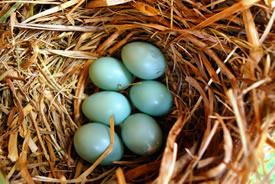 The last bluebird pair released in 2014 flew several kilometres before settling on a nestbox in which they laid six eggs, of which five hatched. (Photo by Jemma Green, GOERT)

In all, two pairs and two families were released by the end of spring. Fortunately, one of the families, which was released at the Cowichan Garry Oak Preserve, decided to stay. Helped by the juveniles from their first brood, the pair raised 4 nestlings — the first bluebirds to hatch on Vancouver Island since 1995!

Building off the promise of the pilot year, the translocation program was fully implemented in 2013 and continued at the same pace in 2014. Over the course of two breeding seasons, a further 36 adults, along with 25 fledglings, were released into the Cowichan Valley, most of which stayed to nest.

As a result of three seasons of translocations, and now that birds that were translocated or hatched in previous years are starting to return on their own each spring, the known western bluebird population has grown from that first historic family of two adults and nine juveniles, to 18 adults (including five breeding pairs) and 50 juveniles in 2014. This growing founder population is now supported by 250 nestboxes across 80 private properties in the Cowichan Valley. 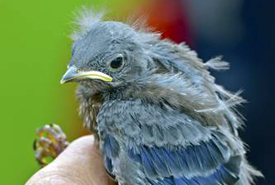 Of course, this is a very promising start for the species recovery effort, but the work of Bring Back the Bluebirds is far from over. Several more years of successful translocations will be needed before the population reaches a sustainable size.

Equally important will be the engagement of the community in creating, restoring and enhancing western bluebird habitat so that the species can thrive once it re-establishes.

One thing is for certain: the sweet song of the Western Bluebird can once again be heard on Vancouver Island, providing a glimmer of hope for the conservation of their rare and endangered Garry Oak habitats.

Bring Back the Bluebirds, led by the Garry Oak Ecosystems Recovery Team Society (GOERT), in partnership with the Nature Conservancy of Canada, Ecostudies Institute, the Province of BC and the Cowichan Valley Naturalists’ Society, is heading into its fourth season! To learn more about the project and follow its progress, visit www.goert.ca/bluebird.

Jemma Green is the Bring Back the Bluebirds project coordinator.