World Water Day: Why a burning river should give you hope 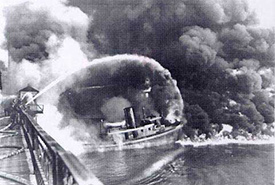 There’s a picture of water I think about a lot. It’s not a loon on a misty lake. It’s not the classic Canadian image showing the back of a favourite paddling mate in the bow of a canoe. It’s a picture of a burning river.

This year marks the 50th anniversary of the last fire on the Cuyahoga River in Ohio. In June 1969, a slick of oil and debris floating on the river ignited. This was not the first time that flame and river had met on the Cuyahoga. By 1969, there had been just over a century of river fires on these waters.

While the 1969 fire was not the largest, or the most damaging, it ignited something much bigger than an oily slick and debris. The burning waters of the Cuyahoga flowed into Lake Erie. By the late 1960s, the world’s 10th largest freshwater lake was one of the most polluted bodies of water on the planet. In a new era of awakening environmental awareness, the 1969 fire on the Cuyahoga River became a symbol of the need to regulate pollution and to protect clean waters. Of the need to change our relationship with water. 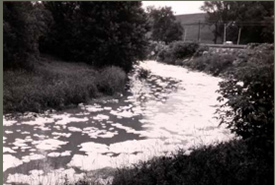 I'm not aware of any rivers in Canada that burned, but across the county many were as dead as the Cuyahoga. The Don River in Toronto was so polluted in 1958 that the city poured chlorine and perfume into its dark and foamy waters to mask the smell before a royal visit to the city by Princess Margaret. The same time that the princess was smelling perfume and chlorine in Toronto, BC's Campbell River Estuary, once a rich and productive coastal wetland, had been turned into a sterile industrial site.

It’s hard to imagine that, for over a century, generations before us tolerated waters that could barely sustain aquatic life. Maybe it was because this was the heyday of industrial growth and a post-war economic boom. Maybe it was because the myth of superabundance still had a strong congregation. It could also have been a syndrome of a shifting baseline, where gradual deterioration goes unnoticed and eventually even conditions like burning rivers get accepted as normal.

But that picture of a burning river also gives me hope. In less than two generations, the water quality of the Cuyahoga and Don rivers, Lake Erie and Campbell River Estuary are significantly better. I purchase Lake Erie walleye fillets at Costco, and the industrialized mouth of the Don River is being naturalized. There has been a transformation of the Campbell River Estuary, and it once again supports salmon and other wildlife. The people of Toledo recently voted to give Lake Erie “ecosystem rights.” Our baseline has shifted in a different direction — in a direction where we recognize the link between healthy water, the economy and our own well-being.

Our waters don’t face flames anymore, but issues still are smouldering. There is still much work we need to do. Too much phosphorus is still entering some of our lakes, causing harmful algae blooms. Too much carbon dioxide is still entering our atmosphere, causing our climate to destabilize. Wildlife and habitats are continuing to decline faster than we can save them.

Shifting our baseline to a place where we value and conserve nature is a good investment in the present, and in the future. Today, no one stands on the shores of the Cuyahoga River, Don River, Lake Erie or Campbell River Estuary and wishes for the good old days when the waters were more polluted. Our investments in restoring these waters create opportunities and a better life for people.

In 50 years, we have transformed these waters. Perhaps more importantly, the rebounding health of these ecosystems has transformed us and the places we live. Communities have embraced their rivers and lakes, and are defined by their waters. People in these communities have become water-keepers, environmental stewards and Conservation Volunteers. Our restoration of these waters has shown that we can do better.

We are not done, but there are stories of hope we need to remember and share. These are our new foundation for a better, more sustainable society. Reminders that we can transform the world we have into the world we want. Into the world we need for the future.