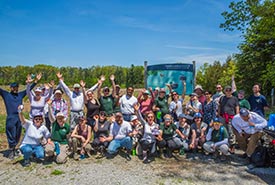 On May 25, many Nature Conservancy of Canada (NCC) National office staff visited our Backus Woods property in Norfolk County, Ontario, for our annual staff field trip. I’ve been working for NCC for almost two years and this was my second time attending a staff field trip.

I think that an annual field trip to one of our properties is an excellent idea. It’s a welcome change from working indoors, and it connects staff who live and work in the city with the important work that NCC does in the field. It’s also an opportunity for staff to see the beauty of our properties and do some hands-on stewardship work.

After a pleasant two-and-a-half hour drive through stunning scenery, which included views of Lake Ontario and the Niagara Escarpment, we arrived at the property. I was surprised to see open fields with small shrubs and tall grass in addition to forested areas. Based on the property’s name, I assumed it would only consist of wooded areas. 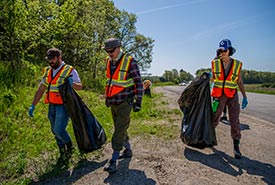 The garbage removal team scans the ground for debris to pick up. (Photo by NCC)

Before getting started on removing red pine, a reporter named Monte Sonnenberg asked me and another staff member to pose for a photo, which was going to be published in the local Delhi News-Record newspaper. I’ve never had my photo in a newspaper before, so I was excited. I recently came across the article and shared it with friends and family. 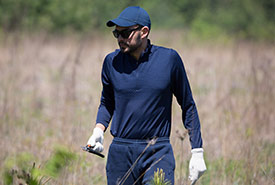 After having my photo taken, I joined the rest of the removal group. There were several red pines located throughout the property, so we had our work cut out for us. The small ones were easy to pull out of the ground with our hands, but we needed clippers to cut down the larger ones.

Just before lunch, a Frito Lay truck driver saw us working and pulled over to thank us. To express his appreciation, he donated some small bags of potato chips for us to snack on. We found comfy spots on the ground and chatted with each other while we ate our lunch and the chips. I enjoyed talking to staff who I don’t often see around the office or who work outside the National office.

After lunch, while other staff continued working, I accompanied some Ontario regional staff to another nearby property, Lower Big Creek Block, so that we could snap some photos of it for NCC’s website. The property comprises a wetland restored by NCC a few years ago. There, we heard American bullfrogs croaking and songbirds, such as red-winged blackbirds, calling. We also saw many dragonflies buzzing around. 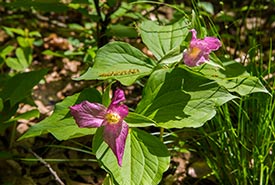 By the time we returned to Backus Woods, it was time for the guided hike. We made stops at several points along the way to see and learn about some of the plant species on the property, including wormwood, large-flower or white trillium, yellow birch and star flower. 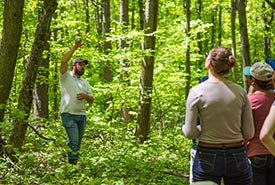 We learned that wormwood is used to make absinthe, a type of alcohol, and that the large-flower trillium changes colour from white to light pink as it ages. This was actually my first time seeing Ontario’s provincial flower in person.

After the hike, it was time to head home. I’m truly grateful that I was able to go on this trip. While I’ve read about and seen photos of several NCC properties, it doesn’t compare to actually setting foot on one. The field trip gave me an opportunity to put myself in conservation staff’s shoes and learn about the work that NCC does on the ground.