Heard it from a Scout: Lessons learned while tree planting in Fort McMurray 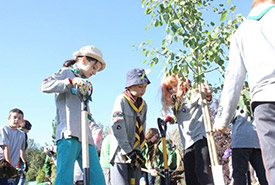 In early 2017, my mom presented an idea to our St. Albert, Alberta, Scout troop — an idea that I didn’t realize would result in our small group doing something really big. My mom is a leader with Scouts Canada and she planted a seed that would grow into a journey that affected many people.

When I first heard about the opportunity to plant trees in Fort McMurray, a year after the devastating wildfires, I was eager and feeling charitable toward the people who had been through so much last year. I thought it would feel good to do my part and give back to the community, just like with all the other service projects that Scouts have done. But this felt like more.

During this tree planting project, I learned a lot. I saw my mom pull everyone together and work diligently on a growing event that a lot of people cared about. It was amazing to see so many people getting involved to help. We planted 850 seedlings and three symbolic trees. I had never heard of a symbolic tree before; the symbolism of the maple leaf is the only thing I knew. I know trees combat climate change through photosynthesis, absorbing carbon and releasing oxygen, clean the air and provide shade. But what do they symbolize?

The symbolism of trees 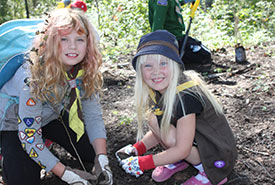 Scouts lending a hand to nature (Photo by Shayne Kawalilak)

The symbolic trees we planted were a national tree, a provincial tree and a tree representing the First Nations. The provincial symbolic tree of Alberta is the lodgepole pine. It represents our province because of our forestry industry, and in early Alberta history, it was used to make railway ties. The railway linked Alberta with the rest of Canada and this tree symbolizes the province’s connection to the rest of the country.

The tree representing the First Nations is the paper birch. At our local museum, I learned about First Nations peoples’ historical uses of paper birch, including making baskets, cradles, canoes, canvas, ropes and mats. The sap was also used as a cold medication. I thought of the Scout law ― wise in the use of all resources ― and could see how we are also connected to this tree and its history.

There was a lot of debate about the national tree. Originally, it was going to be a maple. There are many types of maples, but not all grow everywhere in Canada, and they don’t thrive in the North. It seemed obvious that we should plant a maple tree to represent Canada, but the forestry experts wanted us to pick a different tree. We looked at trees that grow all over Canada. This brought us to the trembling aspen. In many countries, it symbolizes community. Aspens are very hardy and can take a lot. They thrive as an early successional species that grows quickly after fire events, when the canopy is opened up as other trees are removed. We learned that even fire might not destroy a grove of aspen if the roots remain alive.

A city rising from the ashes 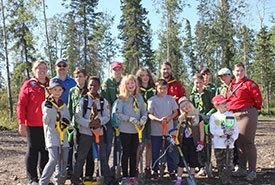 When we drove into Fort McMurray, we saw a city nestled in a beautiful valley of the densest forest. Upon entering, a Scout in our group said, “This is where we are tree planting? Don’t they have enough trees?” We all howled with laughter because it seemed true. I had never seen so many trees! However, when we got close to the forest, we could see the blackened trunks of the trees and the damage within. We saw buildings being constructed, mostly houses, in a barren neighbourhood. We saw bulldozed areas where playgrounds once were but that had melted in the heat of the fire. We set up our camp far away from the forest line because the fire-damaged trees are constantly falling down. A Tree Canada representative told us that protruding spikes in the ground from burned trees can be dangerous. How would we plant here?

I was a bit nervous on the morning of our tree planting. I am a 13-year-old Scout and I was giving a welcome speech and introducing people. I was already feeling how momentous this day was going to be.

We planted in a forest along a trail used by the Fort McMurray Scouts. The Tree Canada representative told us what we were doing was important because the urban foresters are busy making the city safe with burn zones — a buffer zone between the forest and neighbourhoods to help prevent devastation from fires in the future — and that planting saplings after so many dead and dying trees had been cleared out means the community will be able to enjoy the city trails sooner. The forest had previously come right up to houses’ backyards. Since the fire, there are now barriers being created; the forest is being cut back in all of the neighbourhoods so that dirt and grass lie between the forest and the houses. There are a lot of neighbourhoods in Fort McMurray and a lot of barriers to create.

It was motivating to hear the Tree Canada representative talk about the rebuilding of the city and to know we were a part of it. The Fort McMurray Scouts planted with us late into the day. They were enthusiastic to use the trails again, as the trails have been closed since the fires began.

The strength of community

The Fort McMurray community looked after us. They were strong and diligent on the planting day and so thankful that we had travelled there and brought hundreds of seedlings. I now understand the symbolism of trees. The trembling aspen will remind Fort McMurray residents that they have strength in their unity and that they are still in our hearts, letting them know that they haven’t been forgotten.

I left northern Alberta feeling good knowing that I’ve contributed to something meaningful and with an understanding of how one person can do a lot. My mom says we’ll go back one day to hike the trails and see the symbolic trees we planted and the plaque commemorating this project with our Scout groups' names on it. I said goodbye to a city that was rebuilding and flourishing. Through this experience, I learned how a tree is a symbol of hope.

"Heard it from a scout" is written by members of Scouts Canada’s Youth Spokesperson program. This post was authored by Elias Shea.