Lending a hand at Bunchberry Meadows 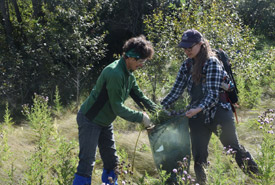 On August 30, 2018, I attended a Nature Conservancy of Canada (NCC) Conservation Volunteers event at NCC’s Bunchberry Meadows property in Alberta. This property was purchased as a joint project with the Edmonton & Area Land Trust, an organization that fellow volunteers taught me about.

The weather was perfect for barbed-wire fence and thistle removal, with a mix of sun, clouds and very light showers. Listening to the other volunteers talking provided valuable learning. As we walked on the trail leading to our work area, one volunteer asked Diane, a more seasoned volunteer, “Why do we remove the barbed wire?”

Diane responded with a personal story of her first barbed-wire removal event: “While we were working, we came across two deer that had bled to death and/or starved after getting entangled in the barbed wire,” she said. “After that experience, I have volunteered whenever the opportunity has arisen to remove barbed-wire fencing.” Her story gave new meaning to the cleanup we were about to do. Fortunately, NCC works to remove or improve fencing to prevent cases like this.

Rolling barbed wire is tricky business. My sister Barb, a first-time volunteer and seasoned “farm fencer,” was keen to teach us how to roll the wire up by alternating sides, allowing the barbs to catch each other and keep the roll tight. 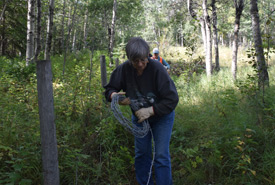 Being a late summer event, it was the last day of employment for the NCC interns at this event. They too shared their knowledge. For example, they told us that the thistle flower heads contain seeds that, once released, can survive for 25 years in the ground. Our goal for this part of the event was to remove the flower heads before they could release their seeds. This method was chosen instead of getting rid of entire plants because removing the flowers and their seeds would help confine the thistles to the areas where they occur. Also, the patch was too large for volunteers to take away all the plants. The field of fluffy seed heads and purple flowers was soon gone and many garbage bags filled with seeds and flower heads were removed. 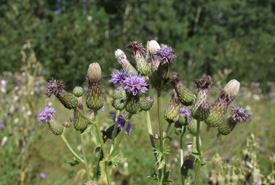 Although thistles are an invasive species, they are a great food source for bees, which are important pollinators. Ladybugs and dragonflies were plentiful among the thistles as well. My heart questioned whether we might be working against Mother Nature in her effort to provide food for her creatures. Despite the internal struggle, invasive species take up space that native plants require to thrive. Most weed species will outcompete native plants, so removing weeds improves the habitat overall.

After removing the barbed-wire fencing and thistles, the wildlife living at Bunchberry Meadows and the people visiting it are now safer. Native plants on the property also now have more opportunity to grow. Participating in this event has inspired me to explore some of the other conservation sites in my area.

June Crowther has been a Conservation Volunteer with the Nature Conservancy of Canada (NCC) for two years.