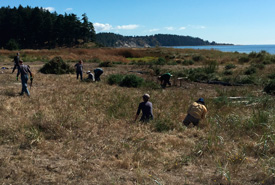 The alarm went off much too early that early winter morning. My body was heavy with sleep, covered in a sea of cozy blankets and it hurt to open my gluey eyes. I was tempted to silence the disturbance. The forecast was calling for rain and it was uncharacteristically cold outside. The bed was begging for me to stay awhile, but I ignored its pleas and got up.

If I had chosen to stay in bed, I would have missed the boat (literally) to where I planned to spend the day volunteering with the Nature Conservancy of Canada (NCC). I would have missed the five-minute ferry ride from Sidney to James Island, British Columbia, where my fellow passengers and I saw porpoises cruising playfully in the distance. 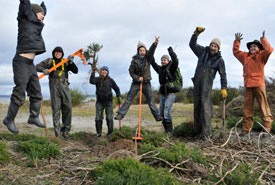 I would have missed the scenic bus ride, where our tour guide and volunteer coordinator, Todd Carnahan, explained some of the different ecological features and rich military history of James Island.

I wouldn’t have had the chance to see small, fenced-off black knotweed, blue-listed native plants that are facing pressure from invasive species, such as Scotch broom, which are causing the rapid disappearance of their sand dune habitat. I would have missed the satisfaction of tearing a small, unwelcome Scotch broom plant out of its invaded soil and tossing it onto a pile of its fellow offenders.

I wouldn’t have seen the mist rolling in with the waves, covering us all in a fine, steady drizzle.

I wouldn’t have had the chance to explore the rest of the island with my good friend Jocelyn, NCC’s west coast stewardship coordinator, and her co-worker Melanie, to learn the basics of monitoring an NCC property. 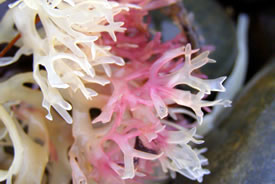 I wouldn’t have glimpsed the bum of a fallow deer as it frolicked out of sight, startled by our footfalls on the trail.

I would have missed the sun breaking through the clouds, silhouetting the elegant arbutus trees that leaned out from the rocky outcrops toward the sea to soak in the sunlight.

I wouldn’t have sat under these trees, eating tuna sandwiches, laughing and sharing stories with my fellow island roamers.

I would have missed the green, pink, red and purple strands of seaweed mixed with tiny white shells, abandoned on the sand's canvas by the ebbing tide. I wouldn’t have seen the orange sea pens writing their stories across the shoreline.

And at the end of the journey, back in Sidney, I wouldn’t have had the opportunity to cozy up at The Roost with a hot cup of Earl Grey tea and conversation with my fellow volunteers.

Sure, a sleep-in would have been great, but I would have missed the opportunity to engage, observe and learn. Always get up and go — you never know what boat you may miss.

Megan Cooper is a natural area practitioner within the Urban Forestry section of the City of Surrey’s Parks department. Growing up with in an adventure-driven family, her love of natural spaces began at a very early age.