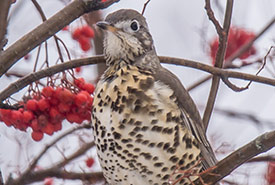 It is here! It is here in the mountain ash tree at the crack of dawn. It is a brief appearance, as it turns out, but one long enough to perhaps sense it is sending a Christmas greeting. A bird, once known as the  mistletoe thrush, now known simply as mistle thrush, that has caused such a stir, beckoning birders from afar and teasing us, is here on Christmas day. It was just 17 days earlier when the story began…

Throwback to the day I discovered the most unlikely visitor

Feeling a little sorry for myself for not having found anything interesting while out birdwatching, I thought I had better get home and continue to monitor our garden feeders for Project Feeder Watch, a winter-long survey of birds that visit feeders at backyards and community areas in North America. Shortly after I settled into our sunroom that looks out into our garden, I saw a heavily speckled bird in our berry-laden mountain ash, just 40 feet away at our residence in Miramichi, New Brunswick. Little did I know this was going to help me get over my recent self-pity in a very big way. 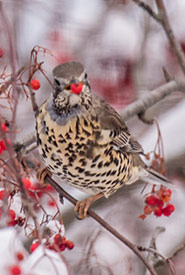 I could see that the bird was a thrush. The best match I could come up with, using a North American bird field guide, was a juvenile American robin, although the time of year, lack of redness in the front and the colour of its feet suggested otherwise. This was the best identification I could make while hoping not to embarrass myself. I sent a couple of photos to a much more experienced birder, Nelson Poirier, a Moncton-area naturalist, who quickly wrote back, “You have something special here, Peter. I will get back to you after conferring with others.” It seems there was quite a discussion with others, but the choices were narrowed down to a song thrush or a mistle thrush ― both birds are found in Europe, Asia and Northern Africa and considered “mega-rare” in North America.

In the end it was clearly identified as a mistle thrush — a bird species never previously recorded in North America. With this identification came a warning: “Are you sure you want others to know about this? Birders from across North America will be interested. It could be hectic.” My wife, Deana, and I are birders, so what choice did we have?

The bird that drew crowds from far and wide

Now, a few weeks later, we do not feel that we made the wrong decision. We have had more than 300 visitors from five provinces and 18 states, and all have been very pleasant and very grateful. During the first eight days of its visit, the very cooperative mistle thrush averaged more than four hours a day in our mountain ash, eating berries and chasing off European starlings and American robins, taking ownership of its food source. It now spends part of its day at a second nearby location. 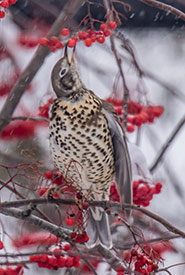 The mistle thrush seemed to have settled in to its new environment. (Photo by Peter Gadd)

In spite of the cold temperatures, made worse at times by severe wind chill, the mistle thrush really seems to have settled into the neighbourhood. Visitors were very pleased to see the bird, observed it carefully, studied its behaviour and added it to their list, indicating it was worth all the travel, which, in some cases, involved many kilometres. About 15 visitors didn’t see the thrush initially; they were disappointed, but had only travelled relatively modest distances. Some, however, have been successful on a subsequent visit.

Recent landscaping on our property meant that people could watch adequately from the road. There was no “invasion.” When the light was poor and the visitors few in number, we invited small groups in to see the mistle thrush from the house. In fact, on cloudless days the blinding light of the setting sun made viewing from the road impossible.

There will come a day, maybe tomorrow, when a visitor will arrive after coming thousands of miles and the mistle thrush will have decided to move on. There will be huge disappointment, but that is perhaps one of the appeals of birding: the search, the chase and the joy of success, which is only possible when mixed with disappointment.

Peter Gadd is a retired teacher with an interest in nature. Peter is one of NCC's Conservation Volunteers.