My (grizzly) neighbours - Part One 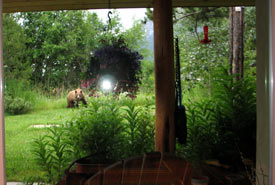 No need for coffee when you see this vision outside the kitchen window first thing in the morning. (Photo by Peter Shaughnessy)

Never leave the house without a camera...and a spare battery. I learned that lesson well over the past 27 years while living and working in British Columbia’s Tatlayoko Valley and I will explain why.

But first, where is Tatlayoko? It is a remote wilderness located in west central British Columbia, 280 kilometres from Vancouver as the warbler flies. To drive there is a roundabout 880 kilometres, the last 30 of which are on a gravel road.

Not surprisingly, there is sparse development and few people (current population is about 75). Ranches and small homesteads are spread thinly along the single gravel road that meanders along the valley bottom, crossing and re-crossing the Homathko River along the way.

These settings result in an area that seems lost in time and an abundance of wildlife living in close proximity to humans — perfect for up-close wildlife photography. The jagged Niut Range in the west and the rounded Potato Range in the east cradle the 22-kilometre-long Tatlayoko Lake between them, making great backdrops for wildlife photos, or spectacular standalone scenic shots.

I work here for the Nature Conservancy of Canada (NCC) as the Tatlayoko project manager. I have been doing this for the past nine years. There is plenty of computer time required by my job, but a significant portion of my work is outdoors amongst the abundance mentioned above. This is the favourite part of my work.

The nearness of the wildlife and the stunning backdrops supply a never-ending stream of photographic opportunity. I am undeniably not a professional photographer but I have been able to document some interesting encounters over the years. My method is simple: be in the right place for long enough so that sooner or later the right time arrives, thereby getting the “money shot.” 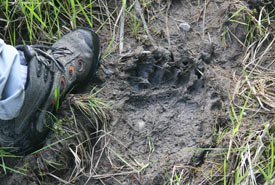 Sometimes all we see are tracks: fairly fresh Grizzly track in soft mud. The human foot is a size 15 shoe. Not sure what size the bear would be but probably XXXL. (Photo by Peter Shaughnessy)

Often my viewfinder does not find the animal; just the tracks, scat or other signs they have left behind. To help in this regard, and thanks to generous donations from several of our Conservation Volunteers, I recently purchased a trail cam for Tatlayoko. Unlike me, the trail cam is über patient, functions well in the dark and is silent in operation. This camera is equipped with black LED lighting that is invisible to animals. Now I can record the track makers (rather than just the tracks) using still images and video both day and night.

Species recorded so far are wolf, black bear, grizzly bear, lynx, coyote and many smaller animals such as flying squirrels and hares. I hope to “capture” cougar, mink and marten to round out the predator list.

This is a beautiful and special place with a unique flavour and people love to come here. I have managed NCC’s Conservation Volunteers program here for the past nine years. It has become very popular and is booked at least a year in advance, sometimes two years. But not everyone can afford the time and money to make the long journey to Tatlayoko, so I want to share my photos and videos with those people.

Stay tuned for Part Two of my ecounters with other grizzly neighbours! 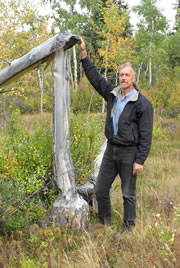