How nature helped me lose 40 pounds 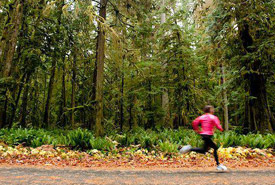 Losing weight was and always has been an uphill battle for me. I would have a good week or two, where I would hop on the scale to see it finally go down after counting calories and sweating it out at the gym, only to be defeated in the days following, after skipping out on a workout or two and downing a bag of chips.

It wasn’t until I made the uphill climb a more literal part of my life — by taking to running up hills on nature trails — that I began to see a difference.

For me, stepping out of the gym and into nature was the first step to success. While many achieve great results within four walls of a gym filled to the brim with exercise equipment and sweaty people, I did not. Going to the gym was a chore to me and became a routine I just couldn’t settle in to. With each skipped trip to the gym, I would feel guilty and reach for the nearest tub of ice cream that I could get my hands on. It became a vicious cycle — one that finally came to an end this March. 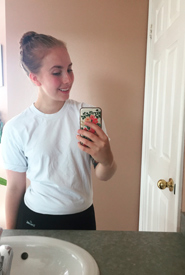 Taking a celebratory-selfie after my weekly weigh-in. (Photo by Raechel Bonomo)

Ever since I was a child, I have loved being outside. One of my favourite things to do was go hiking, so it became almost second-nature to me to start working out outdoors as an adult. Although there were some chilly days, I was often distracted from the actual exercise as I took in the thawing trees around me. Soon, a minute of running turned into one kilometre, and within a couple of months I was running five kilometres without feeling like I was going to be sick. As a previous hater of all things running, hitting that mark was a huge step for me; one that I would never achieve on a treadmill. I was finally making progress.

I began incorporating different types of workouts to different environments. I saved the long runs for the conservation area near my house during the week, and I took to Yoga with Adriene in my backyard on the weekends. I would switch up my running routes so that I had a chance to experience different nature spots around where I live. Not only was I beginning to run faster, and for longer distances, I began seeing different species of plants and explored new places in nature. During my frequent visits to a nearby conservation area, I discovered a secret path between two pines I had never noticed before.

I started to look forward to my runs and what I would discover. Changing my relationship with exercising began through a change of environment.

As the leaves transformed on the trees around me, so did my body. It was only when I stopped thinking about the end goal and enjoying the experience of making my body stronger that I began to shed (and keep off) the weight. Not only did I see a difference on the scale, I felt lighter — both physically and mentally — each time I laced up my running shoes and headed into the forest.

There is nothing like running in a cornucopia of fresh air to clear your head and help to connect with the nature around you.

Although I still have a little ways to go in my personal weight-loss goals, the hill is a lot less steep than when I started. And a lot more green too!