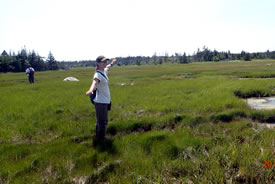 Having spent my summers in Cape Breton, I am no stranger to the fickle weather found here in Nova Scotia. So far, we have been lucky to have mostly  decent weather for our field work (so far anyway). Whether it is tromping through the bush in pouring rain, or hiking through blisteringly sunny weather, our field days always come up with something to make me go, “wow.”

Early on in the season Bill Freedman (a previous board member and large supporter of the Nature Conservancy of Canada (NCC)) came to Martinique Beach to give a quick species identification lesson as we monitored one of the NCC properties. It was a wonderful walk and we were lucky to see a northern wheatear, whose range extends from Alaska and northern Canada (the northern tip of Quebec) to Greenland and Europe. This is not a common species found in Nova Scotia. 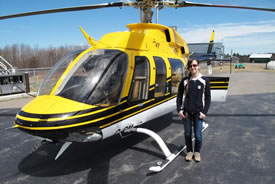 As wonderful as the summer has been so far, from canoe trips to a helicopter trip (such an awesome view!), what would be an adventure without something a little dangerous? For us, that generally sounds like "Stop the car! Tick!" Ticks are common on mainland Nova Scotia and although they used to be more or less restricted to southwestern Nova Scotia, in recent years their range has been expanding. Now, I can personally tell you they have made it all the way to the Northumberland Strait (at least the wood ticks have anyway).

Our hikes through bogs, forests, and barrens have made us adept at understanding the preferred habitats of the ticks, so we generally know when we have to do frequent tick checks. Unfortunately, we have also nicknamed them "little Houdinis" because even days after we have returned safely to our homes (after numerous and supposedly final tick checks), they have been known to pop up; most often from a creased sock or other piece of field clothing. Other than the ticks there has been very little dangerous wildlife we have come across, so for now I’ll count myself lucky. 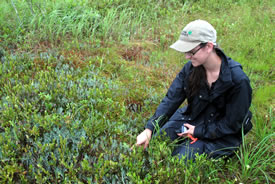 As our conservation intern, Jamie Fraser, knows, I still get excited when I come across the opportunity to identify a new species. Down in southwestern Nova Scotia for example, we found pine barren golden heather (Hudsonia ericoides) on one of our properties. This species is one of the Atlantic Coastal Plains Flora (ACPF) plants, which are a unique group of unrelated plants mainly restricted to flat land along the Atlantic Coast from Florida to Nova Scotia. Nova Scotia is rich in ACPF plants, some of which are globally rare so I’ll be keeping my eyes peeled for these amazing plants!

In addition to surveying the plants on our properties, we are also keeping our eyes peeled for butterflies since we are helping with the final year of the Maritimes Butterfly Atlas, run by John Klymko through the Atlantic Canada Conservation Data Center. This may call to mind vague recollections from childhood of racing across lawns after fluttering wings, which is not so hard, except the butterflies on which there is little data are often found in harder to reach places.

Imagine trying to catch a butterfly in a bog or a dense forest. Not so easy, but very entertaining if you are the person watching the proceedings. I am still amazed that one day I was even able to scoop a northern crescent butterfly out of the grass with only one hand!

As I move into the last few months of field work, I am very grateful to be able to work for NCC here in Nova Scotia. There are still numerous properties, new and old, to monitor so the rest of the season will be jam-packed. And I so look forward to monitoring the properties in Cape Breton, where I used to spend so much time in the summers. After field season is over, the adventures will be few and far between, but it will be good to catch up on research and reflect on the successes and failures of the field season. And, as always, there are preparations for the next year’s adventures to be made.

“So into the woods you go again,
You have to every now and then.
Into the woods, no telling when,
Be ready for the journey.”
~ Stephen Sondheim (Into the Woods) 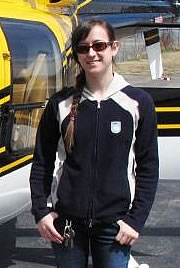