One million steps: A hike to honour the legacy of conservation (Part one) 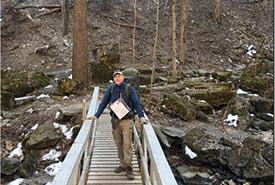 I’ve been working at my dream job at the Nature Conservancy of Canada (NCC) for 15 years. In addition to the deep satisfaction of lasting conservation impacts, NCC is also a great place to work. One of the opportunities NCC provides is that after 15 years, you’re granted some time to reinforce your connection with nature. As my 15th work anniversary approached in the summer of 2017, I was faced with the wonderful and difficult decision of what to do with my time for nature.

I spend a lot of time outside anyway, so I knew it had to be something different than my average walk in the park. My first thought was to travel ― to visit Canadian places I’ve been and Canadian places I’d like to see. I’ve been fortunate through my personal and work life to visit every Canadian province and territory, except Newfoundland and Labrador. I’ve backpacked across the Arctic Circle, hiked through the Rockies collecting herbarium specimens and camped next to prairies dogs in the grasslands. I love these places. They are an important part of my Canada and of conservation. But I know that no matter how many times I go, I will always be a visitor. I wanted this time for nature to be in my ecological home place in southern Ontario. Not a first date or honeymoon with a place, but an opportunity to deepen a connection to home. 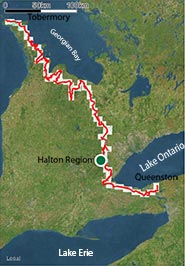 The idea came on a weekend hike close to my house. Here on the Niagara Escarpment was both a World Biosphere Reserve and the Bruce Trail — Canada’s oldest marked hiking trail that stretches for 890 kilometres from the Carolinian forests of Niagara to the tip of the Bruce Peninsula. An ecological transect through some of the most settled landscapes in southern Ontario and some of the most wild ones. 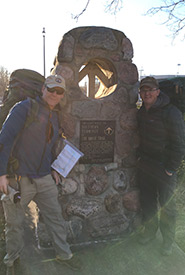 There are of course many logistics for a long hike: vacation time to be approved, equipment tested, menus finalized, and more. Most importantly, I found someone to hike with me — my good friend Chris. We had both volunteered as Scout leaders for almost a decade when our kids were younger. Almost just as important as Chris was his uncle Garth, who agreed to meet us every five days to restock our food and supplies. With logistics finalized, we set out on what we called the Legacy Land Hike on March 25, 2018 from Queenston, near the Niagara River. 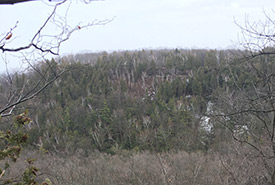 The first week went extremely well. Niagara and Hamilton surprised me. In this heartland of Ontario’s farms and factories, the escarpment can appear as a thin veil of trees. To be discovered hidden within that veil are deep forested valleys and spectacular waterfalls. We walked along the old Welland canal and around Hamilton that are recovering from an industrial past. At Beamer Memorial Conservation Area, we walked through forests that NCC helped to protect in 1972 and 1973. We laughed at the snow still lingering in parts of Niagara after a late season storm, thinking it would be the last of winter as we tracked spring northwards. 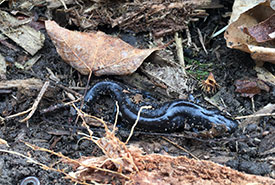 Heading inland from Lake Ontario, the escarpment that dominates the landscape in Halton region was like an ecological homecoming.

But the places I’d hiked many times before seemed different now that I had walked the green corridor that links them to protected areas on the escarpment. One of those areas was near Crawford Lake. It has been one of my favorite forests to welcome spring wildflowers for over 20 years. What I didn’t know until I found that old red binder was that it was also a place that NCC helped to protect in 1974.

Step by step through Halton and Peel, we found salamanders and snakes starting to emerge from hibernation. After over a week, and ahead of schedule on the trail, blisters were turning to callouses, muscles were reawakening, steps were becoming easier and we felt like we could actually complete the journey.

Stay tuned for part two, where I will talk about the rest of my hike on the Bruce Trail.