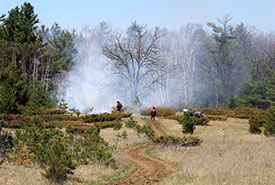 A black oak engulfed in smoke from the prescribed burn at Hazel Bird Nature Reserve. Black oaks are tolerant of low-intensity fires, allowing them to thrive in tall grass prairie ecosystems. (Photo by NCC)

“Why is that on fire?” ― a burning question I have received from many curious folks on my Instagram account after posting videos of a prescribed burn that took place at the Nature Conservancy of Canada (NCC) Hazel Bird Nature Reserve on April 8, 2018. I usually explain that although fire may be destructive in many situations, it is actually an essential element in the fields of restoration and conservation work. 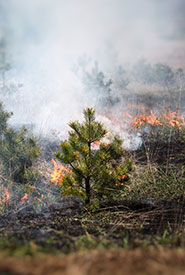 Prescribed burning refers to setting fire to a predetermined area, only under precise environmental conditions, to accomplish a desired outcome. These include maintaining biodiversity, or reducing the severity of forest fires by removing fuel loads (leaf litter, stumps, logs, etc.). At the Hazel Bird Nature Reserve, staff used a prescribed burn to open up the area, promote oak woodland and encourage the growth of rare native species. 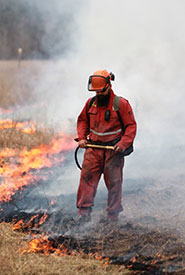 The Hazel Bird Nature Reserve protects 292 acres (118 hectares) of oak woodland, savannah, sand barren and grassland habitat in the Rice Lake Plains. Some of these are rare, threatened ecosystems that are home to species at risk, including the eastern whip-poor-will and eastern hog-nosed snake. In the past, fire would have burned naturally through the area every couple of years. Today, carefully controlled prescribed burns help mimic natural fires.

Fire plays a key role in maintaining the biodiversity of these ecosystems, by slowing the growth of undesirable woody plants. One target is the non-native Scots pine that is invading grassland habitat at the Hazel Bird Nature Reserve. These periodic burns prepare the land for natural re-growth, by promoting fire-tolerant grasses and prairie plants, such as big bluestem and cylindrical blazing star. They also target native shrubs like fragrant sumac. 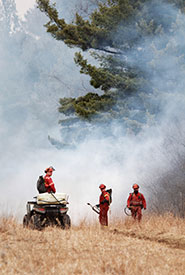 Since plumes of smoke are usually visible to surrounding areas during a prescribed burn, I can definitely understand why there is concern from local communities when it comes to these burns. I would love to ease these concerns by sharing what I’ve learned from observing these spectacular events, as well as from the well-trained professionals who make it all happen safely and successfully. 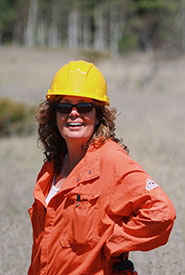 Val Deziel, NCC’s coordinator of conservation biology in Ontario, hires high complexity burn operators from Lands and Forest Consulting Inc. to get the job done, because she has confidence and trust in their work. After watching this crew of previous forest fire fighters work on several occasions, I can understand why. This team shows solid communication, expertise and the use of safe practices. By monitoring variables such as fuel loading, temperature, relative humidity, wind speed and direction, they can determine the most effective and safe time to burn an area. 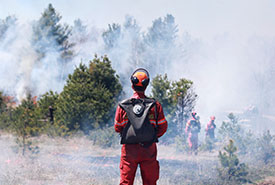 Lands and Forest Consulting Inc. burn boss observing the progress of the prescribed burn at the Hazel Bird Nature Reserve. (Photo by NCC)

Before getting started, the Lands and Forest Consulting crew walks through their game plan, which outlines how the fire is expected to move across the land, the roles of each crew member, as well as main safety objectives , including where bystanders, such as myself, media representatives and the public can safely observe the prescribed burn.

I have watched this crew perform three controlled burns in the past couple of weeks. I have been impressed time and again with how smoothly they operate and how well they manipulate fire to achieve the desired results. I am beyond stoked to revisit these burn sites at the Hazel Bird Nature Reserve in the next couple of weeks to see some healthy regeneration, and I encourage others to do the same.

NCC’s restoration work on the Rice Lake Plains is supported in part by the Ontario Trillium Foundation, through a three-year, $663,200 Grow grant and by the Government of Canada, under the Natural Areas Conservation Program. 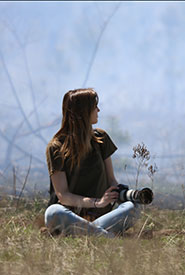 Chelsea Marcantonio is the restoration technician for Central Ontario.