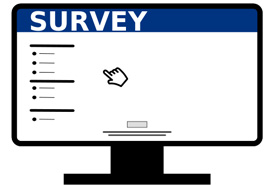 Earlier in the fall of 2015, Land Lines’ editorial team asked our readers for their thoughts on the Nature Conservancy of Canada’s (NCC's) blog. Two and a half months later, we had received 87 responses to our online survey; yielding some interesting results.

The survey was comprised of 10 questions and responses were collected via voluntary participation where the respondents were self-selected.

Below are a series of graphical representation of the results. 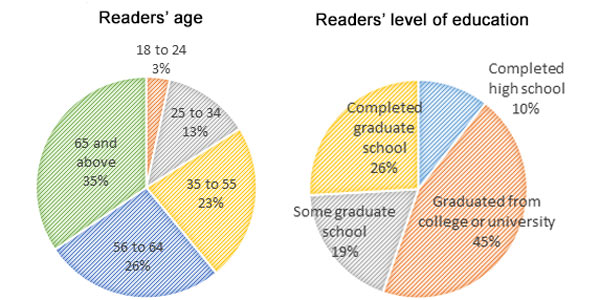 Of our close to 90 respondents, there is an equal number of people who are visiting Land Lines for the first time versus visiting once per month. Fourteen per cent of respondents visit once a week and five per cent visit daily. It was also interesting to note that almost half of the respondents arrived at the blog via the Nature Conservancy of Canada website, contrary to our belief of social media being the main driver for blog traffic. In fact another method by which people land on the blog is through our monthly e-newsletter the Leaflet/ Le Feuillet, which constituted 27 per cent of the responses.

What do you want to read?

Next, we wanted to know which topics interest our readers and we wanted to rank their interest levels. We found conservation and science came out on top, followed by species highlights, creative conservation, nature encounters, personal stories and lastly volunteer activities. The forced ranking system was limited in that some of the respondents stated they were "interested in all topics equally."

In an open-ended question we asked readers what they liked most about our blog. Here is a visualization of frequently appearing words and some of the responses:

"The hook: outstanding photographs twinned with an excellent choice of short articles that focus on a potpourri of subjects."

"The fact that anyone can contribute something to the blog, whether they work for NCC or not."

"The variety of stories about people and projects in all areas of the country."

"Learning about inner workings, how decisions are made, how [NCC] balance priorities."

"The subjects are important and things that we might not find in the mainstream news."

What can we do better?

We also asked readers what they’d like to see more of in Land Lines. The responses shed light on how we can better represent content in a variety of topics and locations, as well as adding new components to the mix.

Some suggestions were broader stroke ideas:

"More suggestions on changes people can make to help wildlife and conservation efforts."

"Negative human interactions with the environment and resolutions to them."

"Where the Conservancy is involved in a particular piece of land for a specific reason."

While some responses were about a particular topic:

"Comeback stories (like the recent one about Swift foxes)"

"I'd like to see features encouraging readers to grow as much of their own food as possible."

"More urban nature stories for us who live in the city without a vehicle."

And some suggestions concerned technical aspects and content submission!

"On items dealing with a particular area or species I would like to see maps included that show the area the discussion is referring to."

"I'd like to see additional space in Land Lines titled, ‘Call for Submissions.’ It would be geared toward connecting writers with wildlife photographers and/or wildlife videographers who wish to create collaborative pieces that inspire more people toward supporting conservation issues."

All in all, the results show continued interest in Land Lines from patrons and new readers alike. We are grateful and encouraged by the feedback. It goes to show there’s work to be done and many more stories to unveil about species, land and people from coast to coast.