Sand dunes that want to be free 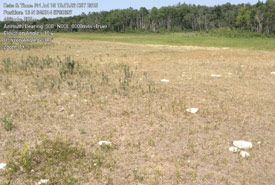 Asquith North 3 starts off pretty unassuming, a fairly flat piece of dry grassland, but a somewhat stunted forest of aspen and shrubs hides a transitioning to dramatic sand dunes frozen in place (Photo by NCC)

Asquith North 3, a Nature Conservancy of Canada (NCC) property that abuts Crown land, is one of my favourite places to visit. That’s a little weird for a NCC staffer in Saskatchewan to say because it really isn't good burrowing owl habitat, sage grouse have never heard of it and you won't find bison poking around.

Last time I was there it was dry and hot, and if I'm honest, when my iPad started to conk out because of the heat, I was kinda nervous about finding my way out. Probably just the heat stroke talking. Getting to the property is tricky enough, which might seem strange considering almost nothing in this part of Saskatchewan is farther than one mile from decent grid road. But once you are there, out of water, doing your best Lawrence of Arabia impression (more staring off in the distance and less leading rebellion) on the top of a (stabilized) sand dune...Well, my imagination got the best of me.

Sand dunes? I hear you asking. Well, yes, but chained, confined and frozen in time. These dunes don't flow and shift like they surely did sometime in the past 10,000 years (or else they'd still be the shape of a lakeshore or river delta, right?). They're fettered by trees, shrubs and grasses. Unassuming and unmoving, but sand dunes none the less. 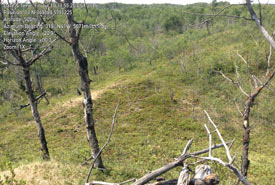 So what do you do with a bunch of sand dunes that just want to be free? Generally, the idea is to reintroduce natural process like fire and grazing, which used to keep the grass, shrubs and trees in check, and let the wind push and pull at those dunes. Anyone got a couple of million bison they want to throw my way? How about a shaky hand with the cigarette lighter? Yeah, me neither.

It is tricky managing land that evolved under regular, heavy disturbances of one form or another. Sandy properties like Asquith North 3 are the best example of that problem (the lack of disturbance). We are in this weird spot where being too conservative and protecting the land too much, might actually be a bad thing for those little plants and animals that need a fresh opening. An opening that looks, to the casually viewer, suspiciously like bare ground and bad management. 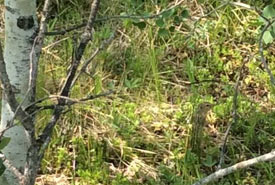 No one wants to admit it, but sometimes a little blowing soil is what's needed. Being too conservative with our application of disturbance might actually be harmful. In the end we might be left with sand dunes covered in scrubby aspen, creeping juniper and my favourite grasses such as rough fescue and little bluestem.

In the meantime, NCC’s Saskatchewan Region is doing its best to use the tools at hand and develop those we don’t have. That means maintaining grazers on the land (in this case, domestic cattle) and learning how to apply fire in a prescribed manner.

In the future we may increase the intensity of our grazing to mimic the intensity of those bison herds more closely and carefully burn small portions of our properties, but that takes time and training. Until we are ready, I'll enjoy the look and feel of those drifts of sand under mats of creeping juniper, patches of fescue and bunches of little bluestem.