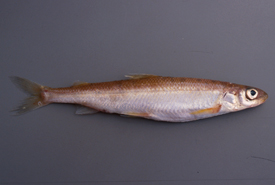 In deep, dark waters all across Canada are ghosts, swimming skeletons and predators but the most mysterious of all are the fish species with an unknown past. Every day biologists are asking and answering the questions posed by nature. Trading in a microscope for a detective’s deerstalker and pipe, they try to fit together pieces of mismatched puzzles to find solutions to some of Earth’s greatest mysteries.

Take, for instance, the pygmy whitefish: a small species growing up to 12 centimetres in length, it has left those who dare to study it baffled.

The species is known to exist in multiple water bodies across Canada with no one knowing exactly how it got to its various locations. Researchers have attempted to connect the dots of this species’ distribution but haven’t reached a conclusion, leaving the pygmy whitefish’s range pattern a mystery.

Click to enlarge: Distribution of known populations of pygmy whitefish in Canada. (Map by NCC)

In Western Canada, the pygmy whitefish occupies a large portion of BC’s waters, specifically Moose and Yellowhead lakes in the eastern part of the province. In Alberta, however, the species can only be found in Upper Waterton Lake and a limited portion of the upper Athabasca River, between the Snaring River (near Jasper) and Solomon Creek.

In Saskatchewan, the pygmy whitefish can be found in a restricted portion of Lake Athabasca. This is the only place the species is known to reside in the province. There have been no known findings of the species in Manitoba waters, which makes its discovery in Ontario one of the strangest in freshwater history.

The pygmy whitefish was first discovered in Lake Superior in 1952 — the species’ most easterly recorded location to date. Until recently this was the only known record of the species in Ontario.

In 2014, the pygmy whitefish was found in Winnange Lake in northwestern Ontario. This finding extended the range of this species approximately 320 kilometres west from its Lake Superior distribution and almost 1,500 kilometres east of its population in Saskatchewan.

One theory suggests the pygmy whitefish sporatic distribution in North America is due to postglacial dispersal from two Pleistocene glaciations but has not been confirmed.

The species’ disjunct distribution continues outside of Canada’s borders, occupying parts of Washington, Montana and Alaska in the United States. Even more mysterious is its overseas population in the Chukotski Peninsula in Russia. 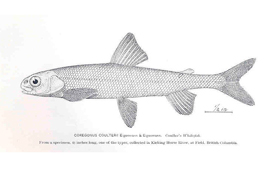 Despite residing in different parts of world, the features and niches of the pygmy whitefish remain relatively the same no matter where it is found.

A runt of the subfamily Coregoninae, the pygmy whitefish is the smallest lakefish in freshwaters. As its name suggests, the scales are typically light and silvery with dark marks similar to those on a young trout, which will fade as the fish matures.

The species is typically found in cold and deep waters, ideal for feeding on smaller bottom invertebrates and aquatic insect larvae.

In both western and Ontario populations, the pygmy whitefish will spawn in fall to early winter. During this time the ventral fins of both the male and female will become dark yellow or orange. It is assumed the species spawns in shallow waters over gravel, but much like its distribution its exact spawning methods are not known.

If a pygmy whitefish could talk, what would it say? Could it answer why and how it made its way across Canada?

This ultimate enigma for generations of biologist is a tale old as the species’ bi-costal discovery, and its answer remains a mystery. This is a case even Sherlock himself couldn’t decipher.

The case of the pygmy whitefish is far from elementary, my dear Watson.