Polar bears are the largest bear species and land carnivore in the world. They are found in the Arctic, where they scour sea ice and coasts for their next meal. Two-thirds of the global population of polar bears is found in Canada. The world’s southernmost population occurs along the coast of James Bay in Ontario.

Then there’s Arctic cod. This slender fish, which is also known as polar cod, swims in waters below the sea ice, which is ruled by polar bears. It is one of the most common fish in the Arctic. This marine fish thrives in below-zero waters thanks to glycoproteins formed in its blood, which create an anti-freeze in their bodies that allows them to survive.

So what do these two species, both bearing the “polar” name, have in common? Without polar cod, polar bear populations would be in deep water. 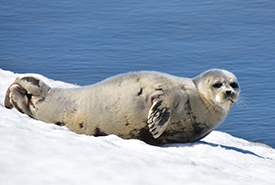 While polar bears may occasionally feast on polar cod, they typically eat large marine mammals, especially ringed seals. When hunting on sea ice, they search for areas where seals may come up for air, such as cracking ice, ice edges and breathing holes. Although they prefer ringed seals, polar bears also eat other seal species and animal carcasses, including whales. A single polar bear can consume up to 46 kilograms of food in one meal.

For there to be food for polar bears, there needs to be food for their prey. Seals are the main predator of polar cod. Polar cod are also consumed by narwhal and seabirds. They are an essential part of the food web, and their habitat needs to be protected to ensure they are around for the sake of these species, including polar bear.

The Committee on the Status of Endangered Wildlife in Canada last assessed polar bears in 2018 as a species of special concern. The species is listed as vulnerable on the International Union for Conservation of Nature’s Red List. Polar bears face many threats, including climate change, contaminant exposure, resource industry activities and conflict with humans. In the long term, climate change is the most serious of these threats. The effects of climate change have critically impacted the amount and thickness of sea ice, decreasing polar bears’ primary habitat.

Habitat for both polar bear and polar cod is suffering as a result of climate change. The temperature of the Arctic region is increasing twice as fast as the rest of the planet. As a result, the ice that these species rely on is melting quicker than ever before.

A good news story for the polar cod is that on October 3, 2018, several nations came together to sign a moratorium on commercial fishing in the Arctic. This moratorium will be in place for the next 16 years, protecting fish populations now and into the future.

The Nature Conservancy of Canada (NCC) helped clear one of the final barriers in accelerating a mararine collaboration of global imporatnce in Nunavut’s Tallurutiup Imanga/Lancaster Sound.

Polar bear and the Arctic are two of 25 species or landscapes that can be symbolically adopted through NCC’s Gifts of Canadian Nature gift-giving program.

Your gift, which contributes to critical conservation work across the country, will help care for habitat that polar bears and other species, including polar cod, rely on for their survival.

You will receive a tax receipt for your donation, and you will help protect our country’s natural areas and the species they sustain — for today, for tomorrow and for generations to come.

Symbolically adopt a polar bear or a piece of the Arctic today.