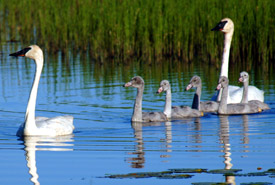 Their call is unforgettable. When you hear it for the first time, “trumpeter” makes perfect sense. Even when silent, a trumpeter swan remains impressive. With a wingspan that can stretch to three metres, this white swan is the largest species of waterfowl in the world.

By the early 1700s, the birds’ large size also caught the attention of market hunters. For over two centuries, there was commercial hunting for their meat, and the skin and feathers of the trumpeter swan were turned into hats, pens and powder puffs. At a time before hunting regulations and game preserves, and when the myth of wildlife abundance dominated our colonial consciousness, it looked like the trumpeter swan might be doomed. In the early 20th century, it had been “rarely seen” in Ontario and was added to list of U.S. birds that were threatened with extinction. It looked like the trumpeter swan was destined to join the passenger pigeon, Labrador duck and great auk on Canada’s ornithological obituaries.

In 1978, trumpeter swan was one of the first species added to Canada’s inaugural list of endangered species. But efforts to save the swan had started decades earlier.

The Migratory Bird Treaty signed between Canada and the U.S. in 1916 brought sweeping laws to regulate hunting, which reflected the emerging culture of conservation among hunters. Modernized farming and synthetics also reduced the reliance on wildlife for their meat and material. In the 1920s, there was growing interest and ambition in Canada to help declining species, which ranged from pronghorn to beavers.

By the 1920s, trumpeter swan numbers had dwindled to a few dozen, with a handful of small undiscovered flocks scattered in northern BC and Alaska. In western Canada, early conservationists were taking “strenuous efforts to preserve the last remaining individuals of this beautiful species.” The Red Rock Lakes National Wildlife Refuge was established in 1935 in Montana to protect many of the last known trumpeter swans. But restoring the species to its former range across much of North America would take more than just protecting the last few individuals. Starting just three years later, swans were moved from Red Rock Lakes to other sites in the U.S. and to Delta Marsh in Manitoba. In 1963, when the first breeding pair east of the Mississippi was reported in South Dakota, about 2,100 trumpeter swans were thought to exist. In 1968, the Trumpeter Swan Society was formed to expand these reintroduction efforts.

By the 1920s, few people in eastern North America had ever seen a trumpeter swan. In addition to overhunting, large amounts of their wetland habitat had been lost. In 1982, Ontario started a reintroduction program led by biologist Harry Lumsden and partners. including the Toronto Zoo, the Wye Marsh Nature Centre and the Ontario Federation of Anglers and Hunters. Using eggs from Alberta and Alaska, a fledgling population was established. It worked. Today you can see and hear trumpeter swans across southern Ontario.

There are now over 60,000 wild trumpeter swans, and the population is growing. They were taken off Canada’s list of endangered species in 1996. In 2003, Mr. Lumsden was awarded the Order of Canada for his work in bringing the species back to Ontario.

Trumpeter swans still face challenges, including collisions with power lines and poisoning from ingesting lead sinkers or pellets. Loss of wetlands also continues to be an issue. Thousands of trumpeter swans winter along BC’s coast, but up to 70 per cent of estuary marshes have been lost or degraded.

Wetland habitat conservation and restoration will protect the success of the species’ comeback. In 2019, the Nature Conservancy of Canada protected more important habitat for the trumpeter swan. The Tidal Flats property in the Bella Coola valley was secured with funding from the Government of Canada’s Nature Fund, including the Natural Heritage Conservation Program and implementation funds for the North American Waterfowl Management Plan.

Sometimes conservation success can take a century. It was a close call. A few more dozen blasts of buckshot and we could have lost this bird forever. But thanks to past conservation efforts we can now witness a bird that a century ago many believed would disappear forever.