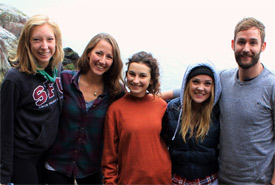 Between ocean and land exists a remarkable place unlike any other in the world: the intertidal zone, where marine ecosystems are both exposed to air at low tide and under water during high tide. This unique space where land and sea meet is comprised of diverse oceanic systems and a wide array of saltwater species. The intertidal zone off coastal British Columbia is home to a variety of familiar species, including barnacles, mussels, surf grass and a colourful predator known as the ochre or purple sea star (Pisaster ochraceus).

Our first introduction to purple sea stars was during a research study at Lighthouse Park for an ecology class we are taking for our Masters in Resource and Environmental Management at Simon Fraser University in Burnaby, BC. When we went into the field, it was our full intention to count the number of invasive Pacific oysters at the park, but during our search, we kept noticing the bright purple and pink sea stars at each of our study sites. When we failed to find any invasive oysters (which is great news!), we quickly switched our project to study the sea stars we had been noticing all day.

Keystone species are those that, on a per individual basis, largely influence the functions of an ecosystem. As a predator that significantly shapes the intertidal zone of coastal BC by consuming copious amounts of blue mussels, the purple sea star is an important keystone species. 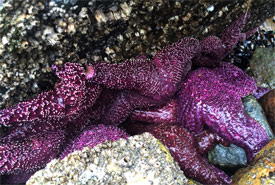 In the 1960s Robert Paine, an intertidal ecologist at the University of Washington, relocated purple sea stars from a small area of intertidal coastline off Washington State in order to study the effects purple sea star populations on other marine species. Professor Paine continually removed sea stars from the site and soon noticed a shocking change in the marine ecosystem.

With a smaller sea star populations, mussel populations exploded — completely crowding out nearly half the intertidal species such as limpets, chitons and barnacles. Many species seen in the area before the removal of sea stars were gone. The result of sea star removal was an overall decline in biodiversity.

A changing climate leads to changes in oceanic conditions, from which unpredictable results can arise. All over the world, disease outbreaks are affecting intertidal species.

Sea star wasting disease (SSWD) is one illness currently affecting purple sea star populations along the northeastern Pacific coast, including BC. This disease wreaks havoc on sea star immune systems, leaving them to decay first by losing their internal pressure then causing them to lose their arms and eventually die. With the key role this particular species plays in the intertidal ecosystem, its health is vital to maintaining healthy intertidal ecosystems. 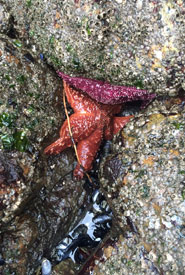 We had a fantastic time searching the intertidal for these brightly coloured animals, but it soon struck us that many more were sick than we had initially thought: SSWD gives the sea stars a deflated look that isn’t always obvious from afar.

The high presence of illness, combined with the urgent undertone of almost all the literature we read, motivated us to find out more and spread the word so hopefully more nature lovers like us can support researchers who are trying to solve the mystery of SSWD before it irreversibly changes the intertidal ecosystems around world. Scientists have known about diseases of the ocean, including SSWD, for a long time, but the combined effects of the illness, ocean acidification, habitat loss, and climate change make it all the more important to learn more about and help solve this disease, along with the other factors affecting the intertidal.

Though the fight to conserve against SSWD is a difficult one, there is something that those of us who are not ecologists or virologist can do to help the purple sea star. Our research group proposed creating a marine protected area. Through protecting the purple sea stars’ habitat, there is hope they will have a place to thrive once again. The conservation of rocky intertidal zones will enhance sea star habitat protection and reduce the negative impacts SSWD has on species populations and marine ecological systems.

Working together, we can make sure Pisaster ochraceus remains the star of the intertidal zone.