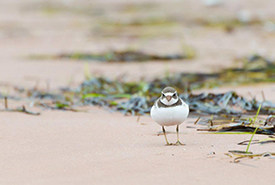 Over the last 20 years, several conservation organizations, including the Nature Conservancy of Canada (NCC), have supported the operation of the Chaplin Nature Centre, located just outside of the town of Chaplin in southern Saskatchewan.

Situated in the Missouri Coteau, Chaplin Lake, Reed Lake and Old Wives Lake are individually recognized as Important Bird Areas by Bird Life International. This area is part of a vital chain of migratory stopover sites. When I think of Saskatchewan, I think of grassland birds, but the reality is that thousands of shorebirds visit just the Chaplin Lake area alone on their way north to their Arctic nesting grounds each year, including over 50 per cent of the world’s population of sanderlings. Over 30 species of shorebirds, some endangered, stop and/or nest in the Chaplin area every summer. Among these species are American avocet, godwit, sandpiper, killdeer, curlew, willet and the endangered piping plover.

According to the Western Hemisphere Shorebird Reserve Network (WHSRN), Chaplin Lake is situated in one of the most important inland sites for migratory birds in North America. It is one of only three areas in Canada with this designation and the only one that is located inland

The area is known to local birders as a hot spot for more than just its shorebird populations. NCC staff who I talked to about Chaplin Lake were enthusiastic and said they were lucky enough to have seen species such as Baird’s sparrow, common nighthawk and Tennessee warbler while out at Chaplin.

Open from May to October, the Chaplin Nature Centre provides education and awareness to the public through indoor displays and outdoor tours of the Chaplin and Reed Lakes. Additionally, in 2014, the Nature Centre partnered with the University of Saskatchewan and Environment and Climate Change Canada (then Environment Canada) to begin to systematically count shorebirds at Chaplin and Reed Lakes during spring migration. 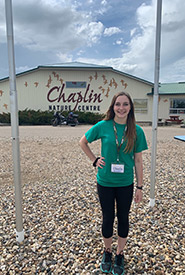 This year, NCC is lending our support to the centre through our engagement manager Kayla Burak’s role on the board and the hiring of two conservation engagement interns for the centre. When I heard about this collaboration, I was intrigued and wanted to know more about my fellow interns in Chaplin. When our engagement intern, Elan Marsall, went down to Chaplin to help out one Friday, I sent her with a list of questions to ask. The intern who Elan worked with that day was Kassidy Roh, an education student at the University of Saskatchewan who has a new passion for birds. According to Kassidy, a day in the life of a Chaplin intern can include everything from opening up the centre and giving tours of our interpretive centre to maintaining the building itself and doing a bit of yard work.

One of Kassidy’s favourite parts of her job is the interactions she has with visitors. She remembers a couple on their way back home to Ontario who stopped in Saskatchewan to visit Chaplin. The first time they came in, Kassidy said they had a great chat about the differences between Ontario and Saskatchewan. 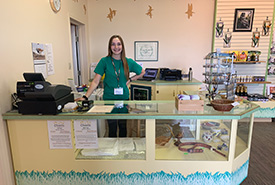 One of Kassidy’s favourite parts of her job is the interactions she has with visitors. (Photo by NCC)

Kassidy and another NCC intern, Kylie, shocked the couple by describing the recent lack of rain on the Prairies and how severely it impacts farmers in our area. Before the couple left, they promised to pray for rain. A couple of days after their visit, Kassidy says it finally started raining in southern Saskatchewan. The couple came back in before they left Saskatchewan, and Kassidy was able to tell them that their prayers had worked.

Kassidy’s favourite shorebird is the American avocet: “It is such a unique bird, with its bright blue legs and red neck.” She loves to watch the graceful way avocets sweep their beaks through the water of Chaplin Lake to find brine shrimp. 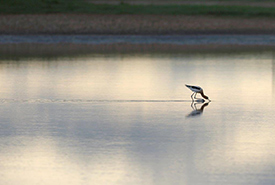 One thing Kassidy wishes more people appreciated about birds is their resilience: “I think people underestimate the strength of birds. I wish people realized just how far a little bird can travel without stopping. Some shorebirds can fly non-stop for three to four days.”

According to the State of Canada’s Birds 2019 Report that the North American Bird Conservation Initiative released this summer, Canada’s migratory shorebirds have declined by 40 per cent since 1970, while long-distance migratory shorebirds have declined by 55 per cent. Birds may be resilient when it comes to flying long distances, but in the face of habitat loss and climate change, they need our help. Conserving and appreciating habitats like Chaplin Lake is more important now than ever.

If you find yourself in the region, stop by to visit Kassidy and the avocets.