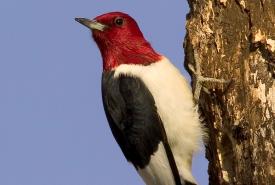 Protected forests are the kingdom of the cavity-dwellers. This is where woodlands grow to an old-growth state, and where dead, damaged or otherwise wonderfully flawed trees take their rightful place in woodland ecology. As a result, nature reserves support the complete roster of tree-cavity nesting wildlife. This includes my faves, the flying squirrels, as well as creatures such as prothonotary warbler, great-crested flycatcher, pileated woodpecker and barred owl — whose tree-home search criteria begins with, “really big.”

Large conserved woodlands are also relatively free of the European starling. These non-native cavity-nesters have barged into most of settled Ontario’s woodlands. Starlings are an interesting species with a noble heritage, but they are aggressive cavity competitors. Their introduction to North America in 1890 has contributed to the decline of species such as red-headed woodpecker. But starlings are not a deep-woods species, and it is a testament to the size and condition of nature reserves like Backus Woods and the Happy Valley Forest that their “hole” neighbourhood does not have to contend much with these bully birds. 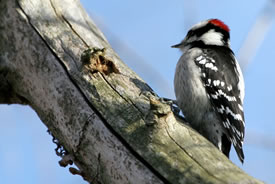 But large or small, protected or not, Southern Ontario woodlands are still being invaded by non-native and pretty nasty insects and diseases. There is beech bark disease, emerald ash borer, Asian long-horned beetle and butternut canker. And don’t even mention the hemlock woolly adelgid, looming up from the south.

Private landowners are dealing with these new influences. Forests affected by these invasive species can be subject to salvage logging, and even pre-emptive chainsaw strikes, to get value from the trees before it is too late. Firewood sales are spiking. There are a few regulations regarding cutting — for example landowners planning to cut a butternut in Ontario must first have it assessed to see if it is a healthy tree, keeping an eye out for resistant strains.

The sad and ironic thing is that nature, in its own way, will say: “Bring it on!” Trees will be killed. Dead trees will be created. The distinction is moot, say the woodpeckers (if they could say so). The niche of the dead-tree-cavity-creator will be in growth mode.

I can’t say whether it is good or bad, but I believe there’s a woodpecker bubble coming. It has happened before, for example, when red-headed woodpecker numbers climbed after the onset of Dutch elm disease half a century ago. It is happening now in the western mountains, where millions upon millions of trees are being killed by the mountain pine beetle. Biologists have seen dramatic increases in a variety of woodpecker species there. It is simply nature’s response to a change in the environment.

The Nature Conservancy of Canada will be monitoring ecological changes as these invasive insects and diseases arrive. We will be studying how populations of woodpeckers and other species shift. There will be increases and decreases, but in which species and for how long? And what about the other hole-dwellers that hang with the woodpeckers? We should be inviting more researchers to study this sadly remarkable history in the making.

In the face of this nightmare, I have had a dream. I have a dream that legions of dead and dying trees will give our woodpeckers the expected boost in nesting opportunities across the landscape. Populations will soar and the rare red-headed woodpeckers will rise again. And then they will join forces with their flying squirrel neighbours and go kick the living (heck) out of those (gosh darn) starlings, and send them packing.

I can’t help but look for a silver lining in all of this, and that would be a good one.