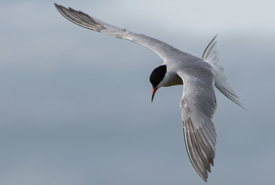 On a June day last year, I found myself on a small sandy island surrounded by thousands of screaming terns overhead. With the smell of guano filling my nose, I carefully picked my footing around nests containing eggs and thought — it's good to be back.

I started my career as a biologist almost two decades ago, working with terns. First, while working on my masters of science degree, I studied black terns in New Brunswick for my thesis. I spent two summers in waders, alternately canoeing marsh channels and pushing through cattails and pickerel weed in waters up to my chest, looking for black tern nests. 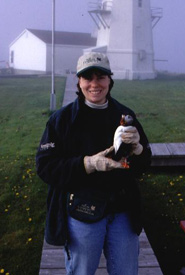 Me on Machias Seal Island, holding an Atlantic puffin. (Photo by Laurel Bernard)

Then I spent a summer working on Machias Seal Island — a seabird colony and national migratory bird sanctuary 19 kilometres off the coast of Maine and New Brunswick — helping to collect data on common terns and Arctic terns, as well as puffins and razorbills. It was there that I learned the importance of a wide-brimmed hat with padding in the crown. Terns get upset when you are in their nesting colony and they drive away predators with their shrill calls and repeated dive bombing with bills and guano.

Those were fond memories for me (hey, I'm a biologist!) so I was delighted when Environment Canada's Canadian Wildlife Service announced it was undertaking a tern census in Atlantic Canada and was looking for qualified partners to help. The census is completed once every five years to monitor the status of seabird colonies and species population trends. One of the key areas was aptly named Tern Island, just off the coast of the Acadian Peninsula in northeastern New Brunswick, in the community of Tabusintac. 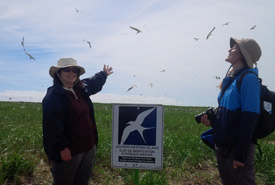 Tern Island had been donated to the Nature Conservancy of Canada (NCC) in 2007 and added to the more than 1,100 acres (405 hectares) protected by NCC since it started working there in 1994. The Tabusintac Estuary, where Tern Island is situated, is internationally recognized for its bird life with several designations, including as a Wetland of International Importance under the Ramsar convention and Birdlife International's Important Bird Area. In addition to supporting up to 17 pairs of endangered piping plover and huge flocks of migrating ducks and geese each fall, it also hosted the second largest common tern colony in Atlantic Canada — on Tern Island.

We had additional help from biologists with a non-profit partner, Nature NB's species at risk program, who had assisted the Canadian Wildlife Service with previous surveys. Accompanying me was another NCC staff biologist and one of our summer conservation interns. It is always great when we are able to give our interns an array of experiences to help them in their future work life. 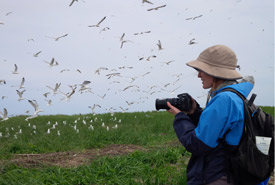 So in June we found ourselves in the boat of a local fisherman who gave us a short three-kilometre ride to the island from the wharf. There we waded through the shallows of this sandbar of an island and sorted out our gear.

In order to conduct the census of the terns we needed to accurately count every nest, count the number of eggs in each nest and make sure we didn't miss any or double count them. All the while we had to be as fast as we could to avoid disturbing the terns for too long so the eggs didn't get chilled or overheated from not being incubated. Luckily it was a perfect day — not too warm or cold.

The six of us quickly set up a pattern. We walked at arms' length apart across the width of the island, with the outside person putting in flags to mark the line of where we had counted. Four people intently watched their feet, picking their way through sandy soil and sparse long grasses, calling out number of eggs found in each nest, and two people recorded the numbers. We had one crew calling in English and one in French so we didn't confuse each other! 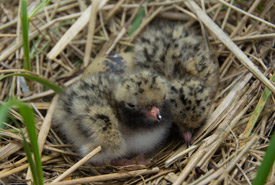 Unexpectedly, we found a few of the eggs had started to hatch, so we had to be extra careful where we put our feet. Young tern chicks are little balls of fluff that blend in well with their surroundings, and they will move out of the nest to hide in nearby vegetation when they hear their parents making alarm calls. Parent terns are also more aggressive once there are chicks to defend.  Luckily there were only a few really upset tern parents whose bills actually made (repeated) contact with our heads, although I think we all were "baptised" with guano. 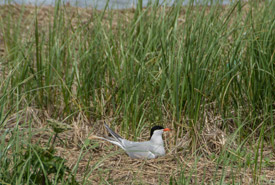 A common tern on its nest. (Photo by Claire Elliott/NCC)

All in all, it was a successful census and after we tallied all our numbers we had found 3,018 nests, meaning there were over 6,000 terns nesting on Tern Island. This was an increase from the last census which counted only 2,633 nest, but a decrease from the high 10 years ago of 3,463 nests. We sent the findings in to the Canadian Wildlife Service and will continue to keep an eye on the population numbers. So far common tern populations appear to be stable in New Brunswick.

I am keen to help out again in five years' time when another census is completed, and to return to my tern biologist roots. To everything there is a season!