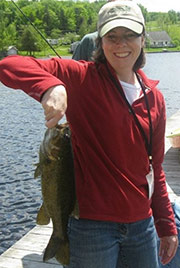 Laurel Bernard is the director of stewardship for the Atlantic region of the Nature Conservancy of Canada (NCC), where she guides the ongoing work involved in looking after 40,000 acres (16,187 hectares) owned by NCC in the four Atlantic provinces. Laurel has worked for NCC for 14 years mainly in stewardship, where she is involved in such varying tasks that include overseeing the Conservation Volunteers program, working with summer interns, ensuring that land management issues are addressed and using the best science to monitor the health of species and habitats.

Laurel has a masters degree in biology from the University of New Brunswick and her academic experience is as an ecologist studying marsh birds and seabirds. Laurel lives in a rural community outside of Fredericton, New Brunswick with her husband and two boys. She goes canoeing as often as she can, and fosters kittens for the SPCA.

Scientists of the (near) future!