Understanding how roads affect wildlife in the Chignecto Isthmus 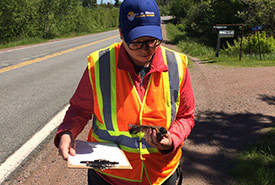 Whenever I talk to people about my summer field work, I am often initially met with expressions of disgust or sadness. The knee-jerk reactions are not surprising. I work very closely with everyone’s least favourite summer road trip sight: roadkill. No one likes the sight of dead animals on the road, but few are aware of the more serious implications that roads have on wildlife habitat connectivity.

Since late spring, I have been collecting data for my master’s thesis in environmental studies, with support from the Nature Conservancy of Canada's (NCC's) Dr. Bill Freedman conservation in science intern. This internship honours the late Dr. Bill Freedman who was an NCC friend and a former board member, and his 26-year involvement with NCC. It is given to a student from Dalhousie University who is contributing to research for conservation. My research with roadkill is connected to the larger issues of habitat fragmentation and wildlife conservation through improving landscape connectivity.

In the past, roads were often built without consideration for how they might affect animals’ quests for food, mates and shelter. The field of road ecology attempts to understand the impact that roadways and traffic have on wildlife, especially in areas with lots of human activity, where good habitat is often fragmented into small patches.

My project looks at the interactions between wildlife and roads in the Chignecto Isthmus region of Atlantic Canada; the narrow strip of land that connects Nova Scotia to New Brunswick. This area is a bottleneck for wildlife moving between Nova Scotia and New Brunswick, and I want to understand how wildlife–vehicle collisions are affecting wildlife populations. It’s not all roadkill though. Live observations, animal tracks and trail camera images all help paint a picture of which animals are on or near roads. Species that avoid crossing roads can also be affected indirectly if the patches of habitat become smaller and more isolated.

Each day, my field assistant and I start our roadkill surveys early in the morning, searching for evidence of unsuccessful crossings on roads that intersect the isthmus from east to west. This is gruesome work, and it’s often difficult to deal with the sight or smell.

After nine weeks in the field, I have collected over 300 observations of vertebrate road mortality along nearly 400 kilometres of road, photographing and recording each one with its geographic location. My goal is to identify trends in where and when the collisions happen. If this research can ultimately lead to better mitigation measures on important roads in the isthmus, such as targeted signage or wildlife underpasses, it will have been a roadkill summer well spent. 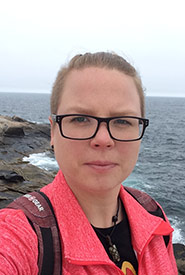 Amelia Barnes is a student in the master's of environmental studies program in the School for Resource and Environmental Studies at Dalhousie University, Halifax, Nova Scotia.