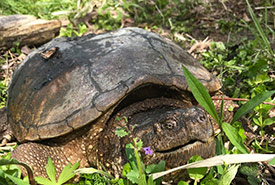 Between oozing mud, mosquitoes the size of golf balls and strange-smelling water, wetlands may not seem to you or me like an appealing place to live. But for most of Ontario’s eight species of turtles, wetlands are an essential habitat.

Unfortunately, humans have been less than kind to wetlands and their inhabitants, and today all turtle species in Ontario have been declared to be at some level of risk by the Committee on the Status of Endangered Wildlife in Canada. The many threats that turtles face include road mortality, habitat loss and degradation, and disease. 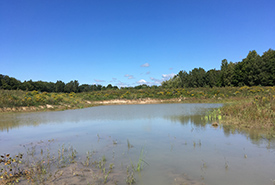 For most of Ontario’s eight turtle species, wetlands are an essential habitat. (Photo by Pascale Bider)

In 2017, the first ever case of turtle ranavirus in Canada was confirmed in a snapping turtle from a degraded coastal wetland in southern Ontario. Ranavirus is a disease that can cause lesions, inflammations and eventually death in turtles. Research suggests that outcomes of ranavirus may be worse in turtles that are stressed by external factors. One such factor could be exposure to human fecal contamination in wetlands, since human feces can carry pathogens that are harmful to turtles.

In the summer of 2018, I trekked across southern Ontario to collect 49 water samples from turtle-inhabited wetlands and waterbodies, including six wetlands on Nature Conservancy of Canada lands. Back at the lab, I tested these samples for levels of E. coli, a bacterial species used as an indicator of fecal contamination. I will be using this information as part of my senior thesis project under the supervision of professor Pat Chow-Fraser at McMaster University. With these data, I hope to identify areas of particularly high fecal contamination in southern Ontario and ultimately help us understand how fecal contamination can impact the health and well-being of our turtles. 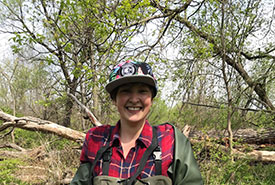