This is Part One of a two-part series on Christmas Bird Counts that took place this winter. The Christmas Bird Count is North America’s longest running citizen science project since 1900. Counts are carried out within a 24-kilometre-diameter circle that stays the same from year to year.

I went to bed the night before my first-ever Christmas Bird Count excited and full of anticipation: What birds will I see? How many will I see?

A few days before Christmas of 2015, I signed up to count birds within the Richmond Hill circle and “persuaded” my husband to come along at the last minute. On the morning of December 19, we met Theo and Tom, both seasoned birders, at a Timmies in Maple and decided Tom would be our designated driver.

Our first stop was a volunteer Feeder Watcher’s backyard in the neighbourhood. Stepping out of the van, we headed towards the backyard and that’s when it dawned on me we weren’t actually going inside the volunteer’s home, as I had previously imagined. I was forewarned that we’d be outdoors, but perhaps I should have put on an extra pair of long johns! 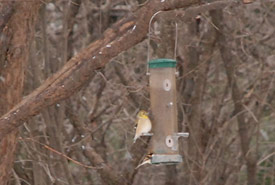 Within 15 minutes, the four of us had counted a bevy of chickadees, goldfinches, blue jays, house sparrows and dark-eyed juncos — a nice start to the day.

Thereafter, we visited numerous storm ponds, making spontaneous stops on the roadside and hitting up one conservation area. Throughout the day we spotted many ring-billed gulls and a few herring gulls.

While on the road we saw flocks of Canada geese flying in their V-shaped formation. We had to count those, too! Out came a declaration: “Fifteen!” That’s when we discovered my husband’s ability to count things in motion, swiftly and precisely; he was named the geese counter of the day.

Other notable observations included hundreds of geese hunkered down in an agricultural field in blustery winds, which picked up in the latter part of the day. There I learned how to estimate the number of individuals in a large flock.

While counting Canada geese in the distance, we spotted what looked like a massive swarm of birds through our binoculars. They did not fly like geese but moved fluidly through the sky. When some started landing in the pond straight ahead of where we stood, we discovered the birds were mallards! Curiously, the birds always followed the same flight path in their landing, which was like watching airplanes land, but with more grace.

Another highlight was during our visit to the Maple Nature Reserve. Tom, Keven and I went to check the site and it was not particularly busy for bird activity, due to the winds and snow. There was not a peep among the sounds of creaking branches. We scanned the woods, to no avail.

As my eyes panned towards a narrow strip of woods, there was something oval climbing steadily up one of the tree trunks. I let out a quiet holler to Tom, saying, “There is something walking up the tree! It’s brown and round!” He saw it too, but the bird had taken a turn on the trunk and continued its way on the other side.

We spotted it again and before we could take a closer look with our binoculars, it had vanished. “You didn’t see anything fly out, did you? Odd how the bird disappeared,” said Tom. That encounter ended up being the only brown creeper sighted in the entire Richmond Hill circle, which made a memorable first sighting for me. 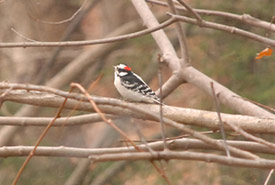 The day was chilly but nevertheless people persevered. The Richmond Hill Christmas Bird Count organizer, Gene Denzel, reported on results that included 53 species plus some unidentified gulls and raptors. His email also attributed some uncommon waterfowl sightings such as common merganser and American widgeon to the large amount of open water in the area.

There was also one each of some uncommon birds: belted kingfisher, brown creeper, purple finch, Swainson’s hawk and a late fox sparrow. All in all, our group counted a total of 11,542 birds!

My first Christmas Bird Count turned out to be a wonderful experience, made perfect with ad hoc birding lessons and tips and tricks from Theo and Tom throughout the day. It was just as Audubon’s online advertisement read: “A perfect Christmas present.”

If you missed the Christmas Bird Count, don’t fret! The Great Backyard Bird Count is just around the corner in February! Find you how you can participate on their website.

Tune in tomorrow for Part Two of this series.