Why did the bear, frog, bat and wolverine cross the field? 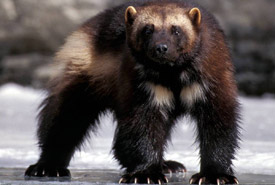 Compared to other conservation lands, “Lot 3” is not much to look at. The 140-acre (57-hectare) property is a perfectly level field of canola located in BC’s Creston Valley, nestled in between the Purcell and Selkirk mountains. Yet as part of the Nature Conservancy of Canada’s (NCC's) Frog Bear Conservation Corridor, Lot 3 is used by a diversity of species.

Lot 3 came to our attention when a model developed by the Trans-border Grizzly Bear Project showed that the agricultural field formed part of a regionally-important grizzly bear linkage zone. Biologist Michael Proctor — the lead researcher for the project — validated the model with data gathered from radio-collared grizzlies from Darkwoods, showing that the bears use the property to cross between the Selkirk and Purcell mountains. 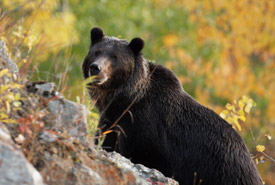 The bears’s jaunt across the field is critically important in order to connect the small and threatened South Selkirk grizzly bear population with potential mates from the Purcell Mountains, to the east. The Purcell grizzlies are part of a regional core population of more than 600 bears, and connecting to this regional population is essential to the long-term survival of grizzly bears in the South Selkirks.

Another wide-ranging animal that has been documented using the Frog Bear Conservation Corridor is wolverine. From her recent research conducted on Darkwoods involving genetic hair snagging data, Doris Hausleitner surmises that wolverines are using the same corridor as the bears, for the same reasons. 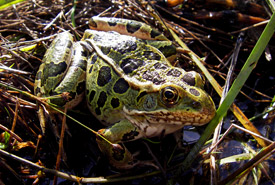 Research also shows that the endangered northern leopard frog uses Lot 3 as well. While only a few frogs have been observed on the land, members of the Northern Leopard Frog Recovery Team think the conservation area is likely being used as a corridor between spring/summer habitat and over-wintering habitat.

Additionally, bat research conducted by Cori Lausen in 2014, funded by the Sustainable Forestry Initiative, indicates bats also use Lot 3 as a travel corridor. A bat detector set up in a stand of cottonwoods detected hoary bats flying through in relatively large numbers in late September. There were far more bat passes per night recorded in this location than at other monitoring sites.

This is noteworthy for a couple or reasons:

1) because elsewhere in North America this foliage-roosting species tends to finish migrating by early September; and

2) only one migration route for this species has previously been documented, at a coastal location near Vancouver in 2009. (Compared to the coastal site, this route through the Creston Valley is a minor flyway for the bats, but it is still a flyway.)

So why did the bear, wolverine, frog and bat cross the field? Obviously to get across the field, but they are crossing for different reasons. Bears and wolverines are likely moving across the field to find mates in the neighbouring mountains, the frogs are hopping through the canola to burrow into their cozy, muddy overwintering habitat and the bats are flying through en route to their seasonal habitats.

What is, at first glance, just a field, is so much more. And thanks to work of outstanding research conducted by several keen biologists, NCC was able to engage a committed group of partners in the conservation of this important property, ensuring the bears, wolverines, frogs, bats and many other creatures can continue to cross the field. 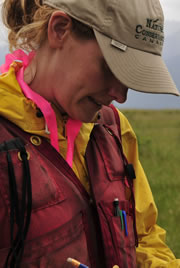